I gotta say, this game never gets old. After playing nearly 100 hours, I’ve finally conquered the world with Rome. The best thing is, every time I play this game it gives different experiences. This is how it went down this time around.

Normally, when I played RTW, I’m really aggressive and careless about building. However in Rome II, I can’t just do that anymore because if I take settlements too fast, the people’s happiness, my cash flow, and food supply will take a toll and my whole campaign will suffer.

So in this game I took slower than usual and focused on building my economy first while keeping my soldier’s tech higher than everyone else so I won’t attract any barbarian invasion. At the same time, the Greeks allied with me — both Athens and Sparta. While Sparta took over the Greek peninsula, Athens took over the Asia peninsula, while Egypt is overrunning Africa and Middle East. So my only option was to take over Europe starting with Gaul, traverse my troops all the way to Spain then backtrack to take over Brittain. It was a good strategy until Carthage started harassing my borders and raiding my trades.

I have to abandon my godly strategy and draft me a new one — this time, I’m taking out Carthage first. Then I realize, this scenario is too eerily familiar to what happened in history — but that won’t stop me. The difference that I did after taking over Carthage is that I didn’t enslaved anyone nor leveled the city like Rome did in 146 BC. I’ve kept the people who are in the city and assimilated them into the Latin Culture.

So from Carthage, I went and took control all of the faction’s territory until they are no longer Carthaginian, but Roman. Then I took my time to rebuild my economy again until I got so much money that I have no idea what to do with it. Playing a nice guy now makes a powerful conqueror later.

As I moved from Carthage to Spain, I found no strong opposition. The Gauls have control of the northern Europe at this point, including Germania, and they are starting to look like a threat to Rome. I receive no threats from the east only because the Greeks are my best buddies. Now I can focus into Gaul territory.

As expected, they now have powerful cavalries and they are putting up a good fight. The only reason I was having a hard time is because I’ve invested in artilleries and the enemy cavalries are just decimating them. I have to pull back and protect my borders until I build myself an army of cavalries and gladiator spearmen. The gladiators have the highest base damage and they are good units as shock troopers against cavalries.

Attacking from both fronts, my main army at the west coming from Spain and my secondary army from the south coming from Rome, the Gauls were finally pushed back and due to their culture, they ran out of money and suffered from hunger soon enough. And just like what I did with the Carthaginians, I occupied the city and assimilate the inhabitants to Latin Culture. This strategy is to minimize unrest and prevents slaves from taking hostile action against the people of Rome. 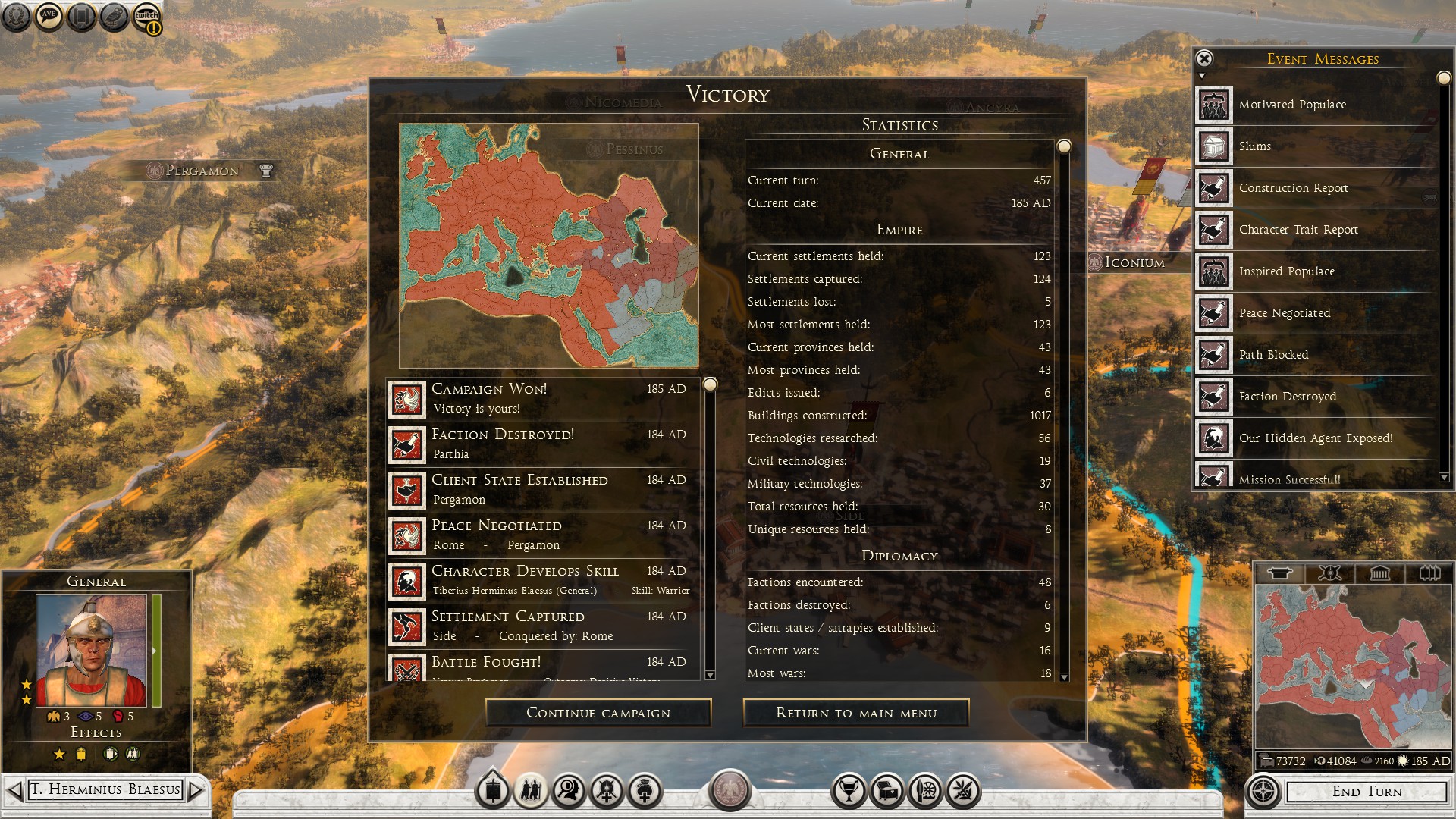 As I conquered Gaul, Brittain, and Germania, there’s nothing more to conquer without attacking my Greek “friends”. Because Rome is too powerful at this point, Egypt and Athens agreed to be my Client States but Sparta will fight for their freedom. Little things like this, makes me smile when playing this game, that kind of attitude is so like Leonidas, so like Spartan. So I gave them the glory they’re searching for and soon enough, Sparta is under my control.

At this point in the game, there’s only one faction that I did not submit to Roman control, that is the Parthians. However, since my Client States are at war with them, they were easily expunged and won me the game.

That’s nearly 100 hrs (92 hrs to be exact) playing one faction and there are over 40 factions I can choose from. The next faction for world domination is the Iceni, we’ll see how things are with this faction. So I guess, I’ll post again 100 hrs later.