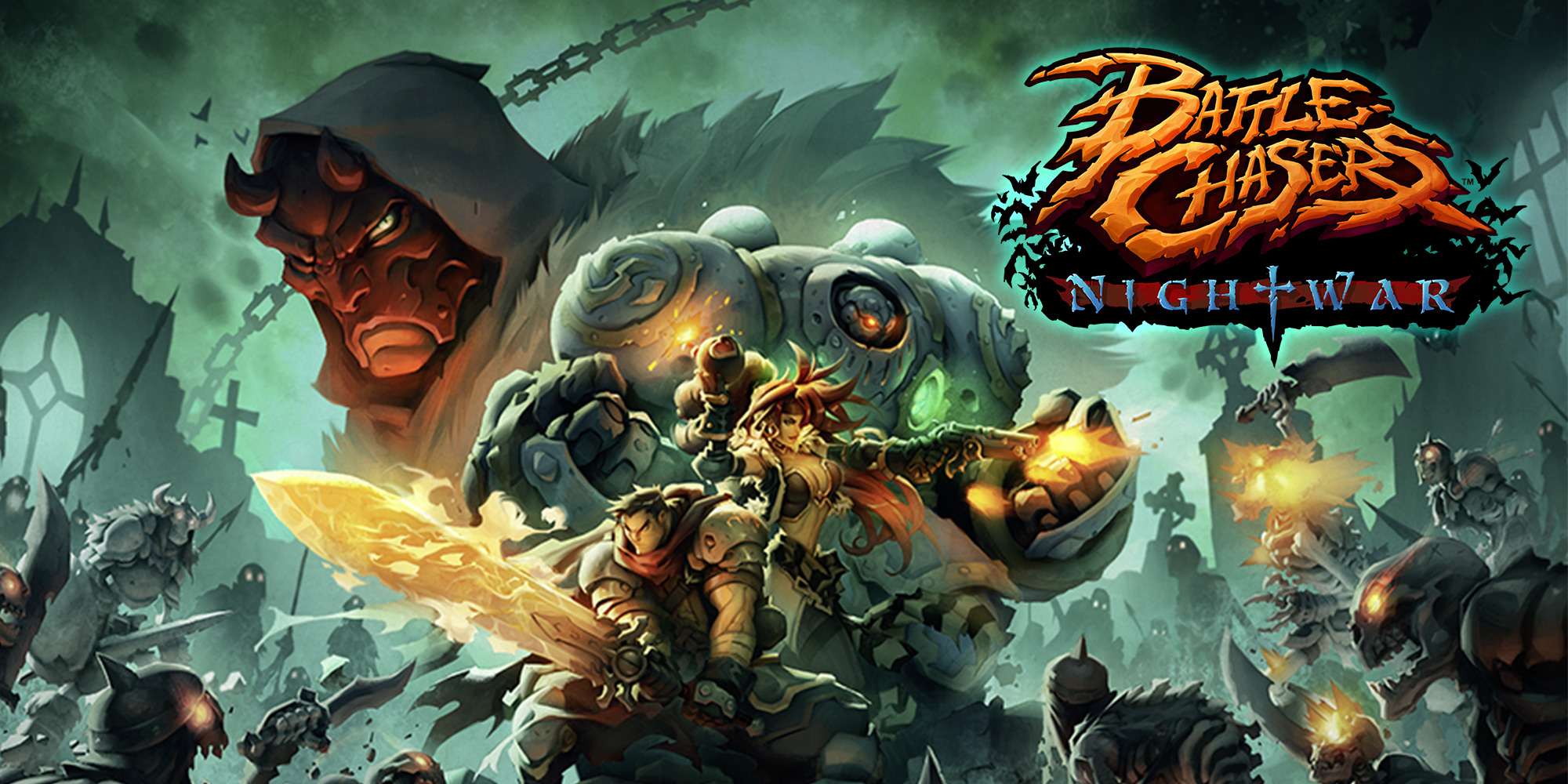 I have been looking forward to playing this game ever since it was announced in Kickstarter. I am a big fan of Joe Madureira’s art style and I used to own the limited series comics of Battle Chasers. Sadly the series ended prematurely after 9 issues, I think, and I’ve lost my collection from the moving from one apartment to next. That’s why when I saw this game being made, I am going to get it.

I cannot support the development of the game from a financial standpoint and all I can do it support it from the retail standpoint by purchasing it, playing it, and make a fair assessment of it here in my blog site. As soon as Steam emailed me that it is now available to purchase, I didn’t hesitate to buy it even though I just purchased GW2’s expansion and bought $50 worth of Gems. I’ll somehow have to pay these off someday like I always do, so there’s no problem there. After installing the game, it launches with a movie intro in Joe Mad’s anime-style artwork. The “lock screen” reminds me of Fire Emblem Heroes when I play it on my Galaxy Tab. As I navigate with the controls, I realize that this game is designed like an app.

Don’t get me wrong, I play a lot of games in my Tab but I didn’t expect that they decided to design the user interface as if I’m playing it in my Tab. In every new game I play, I always navigate to the options or settings to calibrate the controls, the graphics, and the sound to my preference. I am disappointed that there is no option to change resolution, controls, or sound. As I’ve already expected, if this game is designed as an app, I can just click on everything — yup, I just click on everything so not having the ability to change the controls is not a big deal. As for the graphics, it wasn’t necessary either since the animation flows higher than 60 FPS and the resolution is really high definition. I’m just not used to a game that the settings are so perfect that I didn’t have to change anything. However, the sound is not as finely tuned. The background music and the special effect sounds are great but the speech sounds are a bit low. I have to turn up the volume to hear Garrison and Calibretto speak, then turn the volume down during combat. The graphics and the animation are perfect. The different animation for each skill is perfect too. The gameplay is perfect. So yes, I am enjoying the game and once they patch the sounds, it will be golden. 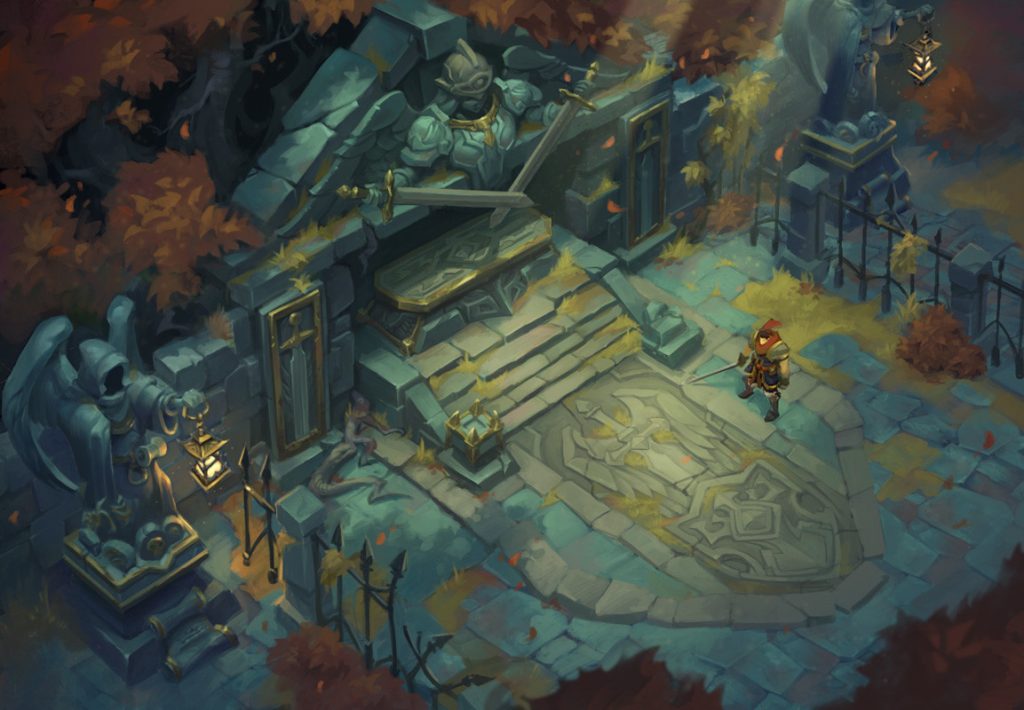 The story and the characters are the main reason I want to play this game but the game design simply blew me away. So far I have reached level 10 and the story is not getting interesting. At the start of the game, the team got separated then I found Knolan — we’re now searching for Monika and I think we’re going to get caught in what is happening on the island. Before we found Knolan, I spent the last 9 level with Gully, Calibretto, and Garrison — basically, the typical MMO “holy trinity”. At first, I thought all of them can tank and I have to use potions to heal but it is not the case. This game has its own combat personality. It uses a resource system called Overcharge. For each basic skill I used in combat, I gain a specific amount of Overcharge. The overcharge gauge will fill in and I can use this charges instead of mana. For instance, one of my special skill costs 15 mana. I can either cast it using mana or use my overcharge charges. In a sense, I can always be able to use my special skills even though I’m out of mana (OOM) using overcharge. Then there are the burst skills. The team will generate enough burst points to fill the burst bar and anyone in the team can use the burst points to use for their burst skill. For instance, Gully will use her burst skill and give shields to everyone. Yes, I didn’t expect that Gully will be the main tank of the team and Calibretto as the healer. 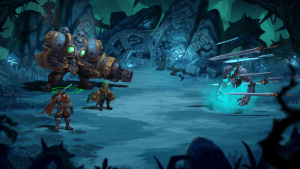 Knolan is a bit of a hybrid class between damage and support. He can party heal and use mana as a shield at the same time deal an insane amount of damage. However, his healing and damage are not as potent as Calibretto or Garrison, respectively. Calibetto has a lot of healing power and Garrison deals a lot of concentrated damage. Knolan’s skills focus on multiple targets for both healing and damage. The best thing about Knolan is his ability to apply Chill. A debuff that literally denies his target their turn which gives me a lot of control of the fight. The party combination can work no matter who I choose to bring and it will only depend on how I want to engage the fight. Once I find Monika, I think bringing her, Garrison and Gully would be a devastating team, albeit they’ll have no healer, but then again, I can make a lot of potions. I’ll see when I get to that point in the game. As I mentioned, I can make potions as well as armor and weapons. There’s also a way to enchant my equipment but I have not found how to do so. Just like any other RPG, there is crafting in this game. 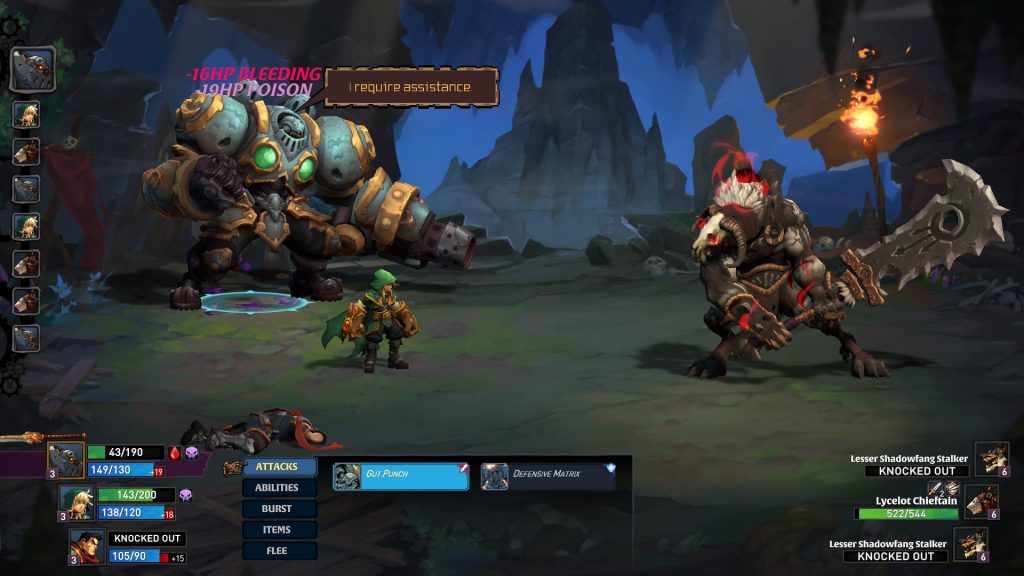 The crafting in this game is a bit frustrating since the only available crafting table is inside a dungeon. I was expecting the blacksmith to have it, but only the herbalist has it so I can only make potions. However, the items I’m finding are adequate enough since I’ve already outgrown the items I can make from crafting. So the phasing in terms of crafting is not in sync with the story and level progression. The recipe I’ve found or I’ve bought are for items 4 levels lower than me — I’m already level 10 and I can only make level 6 items. Since the drop rate is not bad and I am able to properly equip my guys, it seems that I have no real reason to bother with crafting — maybe only the potions. All in all, the game is enjoyable to play and I can’t stop drooling over the graphics and the animation. So in my opinion, the game deserves a 10/10 score once they fixed the sound issue and make crafting a viable option in getting gears. Crafting the same item I can get from a drop is not a convincing proposition to craft my gears since while I’m out farming for materials, the item I want to craft just dropped. So for now, in my honest opinion, I’ll give this game an 8/10.