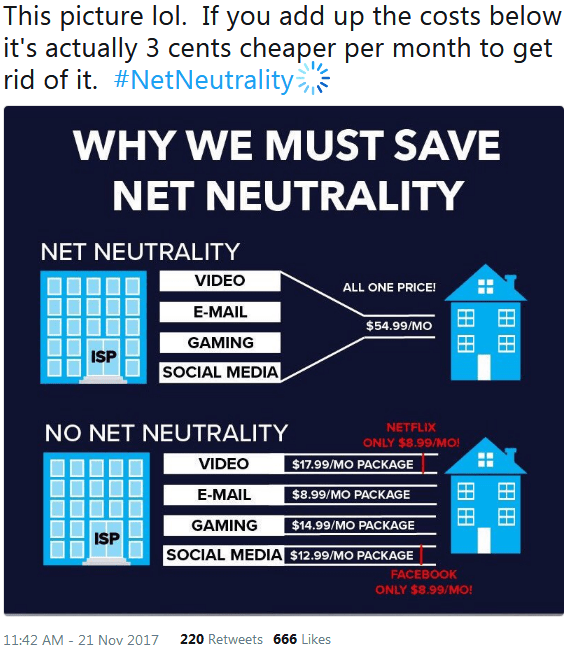 Erik Kain’s article, “Why Gamers, Netflix Users And Everyone Else Should Care About Net Neutrality“, got my attention today. As I read his article, I can sense that he tried to remain objective however his choice of topic betrayed him; he is obviously pro-net-neutrality. He wrote a very convincing article that gently leads his readers to follow his suggestion of calling the FCC to show their protest against ending the net neutrality. He made a case that without this internet regulation, it will give ISPs too much power on how information is delivered. Albeit it’s true, it is not the whole truth.

Equality at the slow lane

Jeffrey Dorfman wrote his article, “Net Neutrality Puts Everyone In The Internet Slow Lane“, back in 2015 making the case that although the internet has equality, we are equally in the slow lane. Thus, to get any faster connection, the consumer has to pay more for internet access. Mr. Dorfman’s argument is truer than that of Mr. Kain’s only because I have experience that slowness of my internet and the cost I have to pay to get it to a reasonable speed. However, before net neutrality, my ISP has been very shady when it comes to internet speed. We often never get the speed that we paid for where they often cited the fact that my plan offers “up to” 30Mbps download and they never guarantee that we will actually get what we are paying for.

Both Fobes contributor has made their point, however, none of this actually affect the cost from the customer’s point of view. Paul Wagenseil’s article, “Net Neutrality Won’t Save the Internet. Competition Will“, took on this issue from a different angle. FCC regulation makes sure that shady practices will not go unpunished, however even with the net neutrality in place, it never lowered my cost for my internet access. Thus I agree with Mr. Wagenseil that competition will be enough to regulate ISPs and control the cost. If an ISP conducts shady practices, for example; raising the cost, lowering the speed and blocking contents, I do not need the FCC to do something, I can simply switch ISP. The problem we have right now, just as Mr. Wagenseil pointed out is that, many ISPs has the monopoly when it comes to internet access. 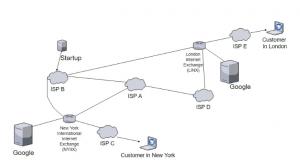 Is the claim true?

There are so many false claims on the internet that it’s hard to decide who is telling the truth. So my approach in this issue is based on how sound the argument is. Another article broke down the claims about net neutrality. Harry Khachatrian of Daily Wire wrote the article, “Everything You Need To Know About Why Net Neutrality Is A Terrible Idea“, where he claims that net neutrality does not affect big companies like Google or Facebook since they bypass the ISP altogether and deliver their content directly to the customer by accessing internet exchange hubs. Instead, what net neutrality does is slows down small companies from reaching their target consumer since they have to hop through different ISPs before reaching their target. So the claim that everyone is equal is not true and this article shows why big companies like Google and Facebook want’s to keep the net neutrality in place.

Why is this issue important?

For starter, it is not important to consumers as much as it is for small companies. As a consumer, it doesn’t affect my internet habits one way or the other since I know that the problem with high internet cost is the lack of competition. As far as I’m concerned, I do not believe that more government regulation targeting service practice since the ISP companies will regulate themselves if there are legitimate competitions competing in their area of service. What I want to see is the government making sure that there is a healthy competition in all areas to limit big companies from monopolizing the consumers. In the end, net neutrality is not the solution and having it in place these past years never really made an impact in terms of cost and internet accessibility. COX still delivers unreliable speed and charges an arm and a leg for access. However, I do not own a small or a start-up company. The claim was having the same internet speed as the big companies help their business, or did it?

I get my internet service from COX and many times I have been frustrated with their service. I cannot simply stop using them because I have no other option. Either I put up with their bullshit or I go on with my life without an internet connection — so I choose to put up with their bullshit. The absence of competition gives COX a guaranteed customer within the areas they control whether the customer chooses to or not. Not only that I have to choose COX, Road Runner won’t even try to provide service in our area because it is COX’s territory. If this sounds familiar it is because it sounds like we are controlled by mafia-style internet companies. If the FCC will get rid of net neutrality, they should also break the ISP territorial non-sense and bring more competition in every area. Basic economics teaches that competition drives prices down and make companies honest. I can already imagine if an ISP offers “at least 30Mbps” instead of “up to 30Mbps” that COX’s bullshit practice will change for the better since their current offer will no longer be popular and obviously they will lose a lot of business, starting with me.