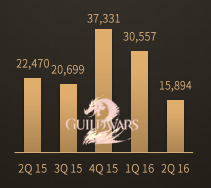 The NCSoft quarterly report came out last week but after looking at it, I don’t even want to write about it, but I have to. These numbers are very good indications on what’s being talked about in their official forum.

Players don’t like the shit you’re forcing down their throats.

Just look at those numbers. Not only that the numbers went down QoQ, it also went down YoY, so whoever had that good idea to give out the core game for free should re-evaluate why they are in the position of authority. I may not have a degree in marketing or economics but my marketing knowledge is not based on academics and theories but based on firsthand experience. I knew that the way they are marketing the game is all wrong. I knew that the way they build up hype is to oversell their mediocre product. I knew this because I used to do this for a living. I knew that if they continue on this path that they are not building trust between them and their customers, they just want that quick bucks.

The amount of contents they want to release is impressive but this is often overshadowed by unfinished and buggy game play. What’s the point of going all through that trouble only to find the game unplayable? What’s the point of making a game that no one can enjoy because the Dev decided to break each and every profession? What’s the point of selling an expansion if the Devs are only interested in eSport?

The story in the game is all over the place and they still insist on continuing with the Living World when that is the main reason why sales have gone down and sales have only gone up when an expansion was released. Now let’s step back for a minute and look at this situation. Why in the world would anyone continue on this path? The false sales pitch. The over hype. The Living Story. All these needs to stop. What they need to do is go back to how the game started and expand on the existing lore rather than trying to create a new one.

A Mursaat is back, but what the fuck that has to do with the fucking dragons? This is another “Scarlet” fiasco in the making. Scarlet was nothing but an annoyance that they’ve created and due to her unpopularity, they have to somehow tie her menace to waking up a dragon. For fuck sake, the dragons have already awoken even without her stupid intervention. The whole thing was a major waste of time and here they are again going the same path.

This is my frustration in this game, which is greater than my frustration to SWTOR’s episodic chapters that never really pan out to anything but also a waste of time. Why do developers do this? Don’t they know how to make a good story and a good game? Or better yet, have they forgotten how? Both BioWare and ArenaNet have produced an epic story in their game before and somehow have lost that vision.

This is the big difference why Blizzard’s World of Warcraft still exist and able to get away by selling $50 expansion and charging $15 monthly fees. Blizzard knows how to tell a story and how to build on lore that they already have and they don’t dare merge the two factions and call the players “outlander”. Any alliances in WoW is nothing but temporary and the animosity between the factions never really go away even though they share the same cause. Their next expansion, Legions, is coming out and the Demon Hunter is cool, but I want to play my Thief in Tyria — and every time I tried to, I’m constantly reminded how incompetent ArenaNet is.

The solution to ArenaNet’s problem is simple.

STOP SHOVING YOUR SHIT DOWN THE PLAYER’S THROAT AND MAKE A GAME ON WHAT THE PLAYERS WANT AND NOT ON WHAT YOU WANT.

It’s fairly obvious that a lot of players don’t want the shit you’re serving anymore and you can continue on this path until you lay everyone off or fire people. You have a very good game, it’s just that the people in charge are sinking your ship.

You want to boost sales? Give what the players want. Stop nickle-and-diming players with your RNG boxes. Let them buy what they want to buy. Stop making players gamble their hard earned money.

If you want more players to play your game, then stop making content that is designed for hardcore players. Create more open world events that actually means something that everyone can participate in. Design a satisfying experience and not a sadistic design that players have a high chance of dying. And if an event is joined by inexperienced players, have an NPC that will help them overcome the event — just like how you designed the boss fight in the Human introduction scenario, where you have Logan acts as a fail safe for new players.

If you want your game to be a satisfying experience, then have things actually being destroyed instead of resetting the event. In Fort Salma, the houses burn until the players put the flames out. In Queensdale, the water stays poisoned until the players clear the reservoir. If the event resets anyway, why do I have to waste my time? That’s the main problem in Verdant Brinks where event wants players to participate but after a long battle, everything just resets. Why not just leave the fortification up until the camp is overrun again? So as long as the players are defending the camps, they should not have their efforts reset and go to waste. It’s inevitable that the camp will get overrun at some point, but at least give the players a chance to keep it fortified if they devoted their time to defend it. Right now, it’s not really worth defending the camps — the experience is not very rewarding nor satisfying.

Even though I am genuinely sad looking at how my game had become, I can only exercise my power by not supporting this direction of the game by not purchasing anything anymore. I don’t even bother playing in 2 out of 4 zones in HoT because they’re either very frustrating to navigate (Tangled Depths) or it is designed for hardcore players (Dragon Stand), so basically, I paid for the whole expansion but only got half of it. Thus, it is something I will never do in the future.

So I speak with my money. I reactivated my WoW account and sub for 3 months and purchased Legions, thus I have spoken.