It’s been a month since Mass Effect: Andromeda was released, yet it’s still struggling to impress critics and fans alike. The recent rating didn’t improve after a month instead, they even lost points. So why did Andromeda failed? To answer this question, I went on a Mass Effect marathon this Easter weekend.

First of, I do not own the original Mass Effect but looking at its rating, I cannot argue that it must have been a heck of a game. Judging from the Mass Effect 2’s interactive comics, it showed me how grand the game design and scope were and how great the story was. So seeing that the Mass Effect has a critic rating of 89/100 and an 8.6 user rating, I just have to believe it. 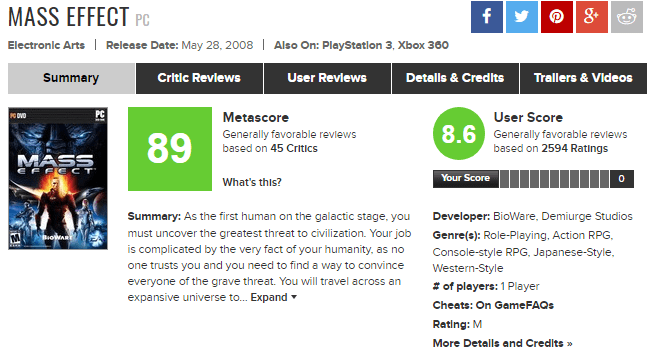 So for the weekend, I launched Mass Effect 2 and started from scratch instead of loading up my previous saves. I want to experience it from the start and honestly, the game already put me into a situation where shit has already hit the fan. The Normandy is about to explode and I got spaced. It’s a fucked up way to start a game, but damn I’m already hooked. In my opinion, it’s the best way to reset the main character without actually permanently killing the character. Then the rest of the game is about preparing for final battle with the Collectors. You don’t need an open world to encourage exploration, you just have to create a well placed intrigued on what’s happening in certain planet or system. The need to collect materials for crafting equipment was a good incentive, however after a while, it became pointless when I’ve already upgraded the ship and all my weapons. The one thing that stood out with this game even having played it multiple times already is the characters. Each “loyalty mission” shows their individual motivation, reasons, goals, etc. It’s a great way to expand each character and gives the player a choice to decide if certain character even worth keeping. In my multiple runs, the story evolved very differently since the choices I make differs every time depending on my mood — this is why the game has a lot of replay value. Personally, Mass Effect 2 is my favorite which the critics and other users agree.

Then came the third installment. Mass Effect 3 is a mixed bag for me and I’ve also sensed that this is where it all begin. Right after the release of Dragon Age 2, Bioware seems to have lost sight of their vision and the kind of game they are making. Mass Effect 3 received a sad 89/100 critic rating and 5.6 user rating. If this is any other game, this rating would have been perceived as a success, however, the tentacles of EA is all over this project and the Mass Effect fans can see it. Mass Effect is all about having the player’s choice matter either immediately or later in the game. Mass Effect 3 played a lot around politics, social justice, and racism. Instead of focusing on the unity of the galactic republic, the game focused on division and making unreasonable scenarios that neither realistic nor logical. The choices in Mass Effect 2 are reasonable because it respects the intelligence of each character and they are treated as adults instead of little brats. Mass Effect 3 has the moments but there are plenty of unreasonables. BioWare did optimize a lot of things but the fact that it forces me to play online in multiplayer mode is something that EA might have forced on BioWare to include. I don’t mind them adding that kind of feature, but forcing me is something I do not appreciate since the Galactic Readiness relies on the multiplayer mode. I have suspected that due to this EA-meddling, BioWare has to rush the complete the game thus the ending sucked so bad that there was a revolt online among the fans giving the game its 5.6 user rating.

Before Andromeda, there is this mess called Dragon Age: Inquisition, or should I say, Mass Effect: Andromeda Beta. The open world design of DAI is something that Andromeda shares and it seems that the goal is so fucking similar that it reminds me of how EA had squandered Command and Conquer Generals and made Battle for Middle Earth. They just basically modded the game to make another game, a practice that stopped me from buying any EA games. I used to buy Madden — no more. I used to buy Sims — no more. I used to buy Star Wars — no more. I only buy BioWare because of BioWare but now that EA is starting to control how BioWare functions, I might stop buying BioWare too. Andromeda would be the first BioWare title I would not be purchasing since I don’t really have a say on what they create, I only have a say with my money. I do not approve the EA practice of taking an old game then simply reskin it and release it at full price. They did this with Madden, CnC:Generals/BFME, and Star Wars the Old Republic. Yes, SWTOR is a modded Dragon Age only on an MMO scale. However, I commend the SWTOR team by moving away from that malpractice and really create a game which can be seen in their expansion packs.

BioWare has put out an effort to correct Andromeda, however I doubt that this crap of a game can be fixed with patches. In my opinion, they should take the game and rebuild it from the ground up, just like Square-Enix did in Final Fantasy XIV. Andromeda has a lot of problems beyond aesthetics and it’s not getting any praise unless they fixed all game breaking bugs, pathetic voice acting, and lame story line. If SE took 3 years to rebuild an MMO, it shouldn’t take too long to rebuild a smaller scaled Andromeda. With all honesty, I really want to play this game and I was looking forward to this and it’s really frustrating not being able to. So, I’m sadly playing the old Mass Effect to get my Mass Effect fix. I still can’t figure out why Tali keeps on dying in Mass Effect 2.