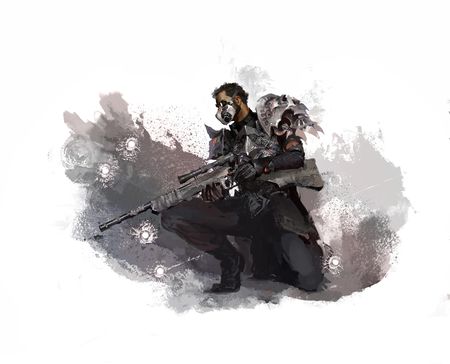 gw2skills.net just updated their builder website and here is my preliminary loadout for WvW and major PvE and something for PvP. I’m not quite sure what kind of mob behavior to expect in the Path of Fire, but I want to be ready for both hard-to-kill mobs and group mobs.

PvE – the P/P Dancer
In my experience with the Heart of Thorns expansion, my Berserker/Valkyrie set is inadequate to handle a lot of contents and I found myself dying a lot. I’ve since adjusted my build since then and I’m going to take some pre-cautions this time around. So I’m opting to bring a Berserker/Soldier sets this time replacing my Valkyrie pieces. This will give me the necessary toughness that will hopefully buy me enough time to kill my target before it kills me. Now this build is what I’m expecting after I mastered the Deadeye spec, so before then, I’ll be roaming around in my Daredevil spec — I might use the staff again. The Deadeye spec is very noobish when it comes to functionality, which means, it is very shallow — there’s not much depth to it. As for the traits, I’ll be switching between Maleficent 7 and Be Quick or Be Killed depending on the mob. If it is a boss, I’ll be using M7 since the Deadeye’s Mark will stay on the target for a very long time. As for easy kill mobs, Be Quick or Be Killed is the best choice with a potential to stay on Quickness buff until every mob is dead. Fire for Effect is garbage, not even raid-worthy.

WvW – the Hide and Seeker
This is the actual build I tried during the preview weekend and I’ve been tweaking it to find the right combination to deal the most initial damage then engage with Sword/Dagger (swapping weapon breaks kneeling) using skill #2 to close the gap. I can use this build to either scout or defend the wall. The kneeling range is just ridiculous that I can position myself to a hard-to-reach place and still be able to deal damage. Of course, the major flaw of long-ranged attack is the line of sight. Thanks to gliding, it won’t be impossible to find the right position. The part that I’m still practicing is timing the Mark and Stealth attack. Cursed Bullet has a 3/4s casting time while Deadeye’s Mark has 1/2s casting time. This will give my target roughly around 1s to react to my Mark and if they reacted fast enough, I will miss my Cursed Bullet shot. Unlike Steal, Mark has a casting time to prevent the Thief from pre-casting and Marking at the last second effectively eliminating any possibility of a reaction from the target. This makes the timing a bit clunky and risky to combo. Most of the time, when my target sees the Mark, they instinctually dodged my Cursed Bullet which denied me the initial attack damage. However, all is not lost since one of the skill I like with Rifle is Skirmisher’s Shot. Skirmisher’s Shot is very cost effective since the duration of cripple is 4s while it only cost 3 initiative — technically a free skill (which I’m sure will get nerfed). However the cost of the skill is relative to my opponent. For example, if this build is fighting against a Dashing Daredevil…well, of course, I’m dead.

PvP – to be honest I don’t think Deadeye can compete in PvP. Looking at the other professions I’ve test driven over the preview weekend, Deadeye is dead in the waters. How in the world can Deadeye compete with Mirage? How can it compete with Weaver? Spellbreaker will decimate Deadeye with its anti-boon skills. And how in the world can Deadeye compete with Daredevil? This is the problem I have with the ArenaNet Design Team, they think of a concept they thought that’s cool then pour manhour into it before realizing that it was a mistake — that they made a pile of shit instead of a masterpiece. In terms of the other profession, I believe that they did a good job, but time and time again, Thief is something they’ve never given enough time to reiterate. With all honesty, whoever approved the Deadeye design, they need to roll a Thief and play in PvP using it and dominate or at least compete effectively.

However, Daredevil was also useless in PvP from the beginning and after some tweaks and other changes, it is almost in a competitive state — almost. I’ll just have to wait and see what they’ll do, but I’m not going to fool myself into believing that Daredevil or the Thief, in general, can actually compete, because this profession can’t. It just can’t. Seeing that the PvP scenario will be populated with Mirages, Weavers, and Holosmiths — Holosmith is something I have not talked about since I didn’t get a chance to test it, but I’ve seen what they can do and how much damage they can deal — Thief just don’t have any chance. I am yet to see a Thief who actually succeeds in competing because from what I’ve seen in professional matches, Thief is a liability. To be honest, I don’t really care if Deadeye can’t compete at all as long as it’s not garbage in the areas of the game I play the most — PvE. ArenaNet should just abandon their delusion that they are building an eSport. The sooner they accept that fact, the better their game will be because they will be focused on developing things that players like (e.g. Lore, Story Telling, Adventure, etc.) than forcing to players what they like. Let me play Soldier as the Vigil. Let me play Tomb Raider as the Priory. And let me play James Bond as the Whispers. The Pact is gone, but the Orders are not. I like the direction ArenaNet is taking with the Shining Blades and I appreciate the not-so-surprise, but they can do more if only they would focus their resources.