Leveling a different job is, to be honest, a pain in the ass. The biggest problem is that, during leveling my main job, the pacing is perfect due to the EXP from the Main Story Quest and Side quests. Once those quests had been consumed, there’s nothing left for leveling a new job. This is where the Deep Dungeon comes in.

The only options to level up an alt-job before the Deep Dungeon is to max out Leve and Beastmen Quests everyday — and the next best option is to grind dungeons. The wait time for dungeon queues are 20-30 minute wait due to anti-DPS bias so grinding dungeons has been a very frustrating, pain in the ass, endeavor. Fortunately, the FFXIV team recognized this after researching why players are leaving the game. I left for this very reason — nothing to do and too much grinding. After reaching level 50 in ARR (2.0) with my Dragoon, I can’t bring myself to level another job, so I unsubscribed for a few months. I’ve played Black Desert Online, Overwatch, and WoW:Legions during this FFXIV break.

MMORPG will always have grinding or tasks that are made to be repeated over and over again. What makes a task grindy is relative to what kind of reward do I get for my time investment. For instance, if I did a task for 60 minutes, is the reward worth 60 minutes? In a game like Black Desert, most tasks, although repetitive, doesn’t feel grindy only because the time invested is rewarded appropriately — to be honest, very generous rewards. GW2, SWTOR, and WoW:Legions are the good examples of grinding because the time invested is not always rewarded appropriately. Overwatch competitive is grindy also because I don’t believe that the Skill Rating system is fair. The reason why I brought up grinding is to show the difference between what my definition of grinding is and the design of Deep Dungeon.

Deep Dungeon was added in Patch 3.35. I returned prior to Heavensward (3.0) and clenched my teeth as I grind my Summoner to level 50. The Heavensward expansion has a lot of alt-job friendly features mainly the Beastmen quest. These quests were designed perfectly for alt-job. However, all these alternate leveling options became obsolete after 3.35 because Deep Dungeon is where everyone is and it’s the best place to level up an alt-job. I was still overwhelmed with the amount of content in Heavensward that I brushed off Deep Dungeons and eventually forgot all about it. When I choose to try the new jobs, I picked the Machinist first. I went to Quarymill and was wondering why there are too many people there. Little that I know that people flocked the small village in the middle of nowhere because Deep Dungeon is there. Not until Stormblood (4.0) that I got curious enough to find out what’s making players flock Quarrymill. 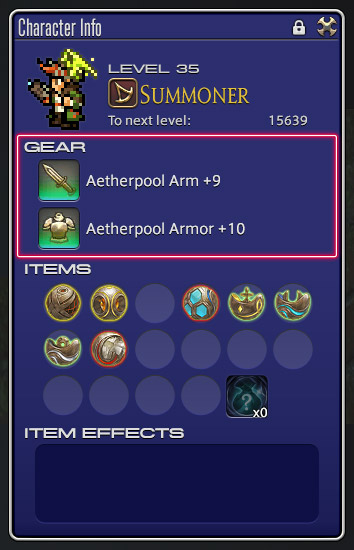 I brought my Summoner to the Deep Dungeon first to just check it out and see what’s it’s all about. This dungeon has several floors and every 10 floor is a boss fight. My stats and gears mean nothing in this dungeon because it uses Aetherpool to calculate my damage and resistance. There are items I can pick up to increase my Aetherpool Arm, which increases my damage, and Aetherpool Armor, which increases my resistance (yeah it’s badly named — arm and armor — why not dmg and def — I digress). After reaching floor 20 I decided to try another job, so I switched to my Red Mage. There’s some caveat on switching job but I won’t go over it since it’s too much to explain and the new player guide can explain it better (HERE). I started enjoying this dungeon only because it’s the fastest queue and the reward is very generous. It grants a lot of EXP, gold, and tomestones, not to mention several perks for dedicated players. Each run has a time limit of 60 minutes and depending on team composition, this dungeon can be completed within 30 minutes. This is the fastest EXP generating dungeon since 30 minutes is just a typical wait time for the traditional dungeon run as a DPS. Of course, there is a caveat concerning EXP.

One big caveat during Deep Dungeon run is that the EXP gained by killing mobs does not benefit the job I’m using outside the dungeon. The EXP is rewarded upon completion, thus incomplete dungeon runs will not grant reward. So if the whole party died at the boss, all the time invested will be for nothing. Failing this dungeon is impossible if everyone in the party plays efficiently and effectively — meaning pulling and pushing responsibly. Reckless rushing often leads to accidental multiple pull that typically result to someone dying or a party wipe. As a Red Mage, I can usually save someone’s ass from dying using my Dual-casting Healing Spells. My Summoner cannot heal as well as my Red Mage but I have access to Resurrect just in case some idiot bites more than he can chew. A party full of DPS typically plows through the floors and complete the dungeon within 30 minutes that’s why I dubbed this dungeon as the DPS playground. DPS can go crazy here since even if they are being reckless, the mob dies quite fast that they are not really in danger. However, I still heal their asses with my Red Mage only because I don’t like wasting my time because of one idiot in the party.

Now by the general term of “grinding”, I am grinding since I’ve been running the same dungeon over and over again. However, it is only grinding to me in the absence of appropriate reward. As long as it remains an even exchange, my time in exchange for EXP and loot, the dungeon runs will never be a grinding to me. Now compare that GW2’s trash reward, SWTOR misproportion reward, and WoW:Legions’ ridiculous artifact weapon related reward — those are grinding, Deep Dungeon is not — my Wind-up Edda agrees.