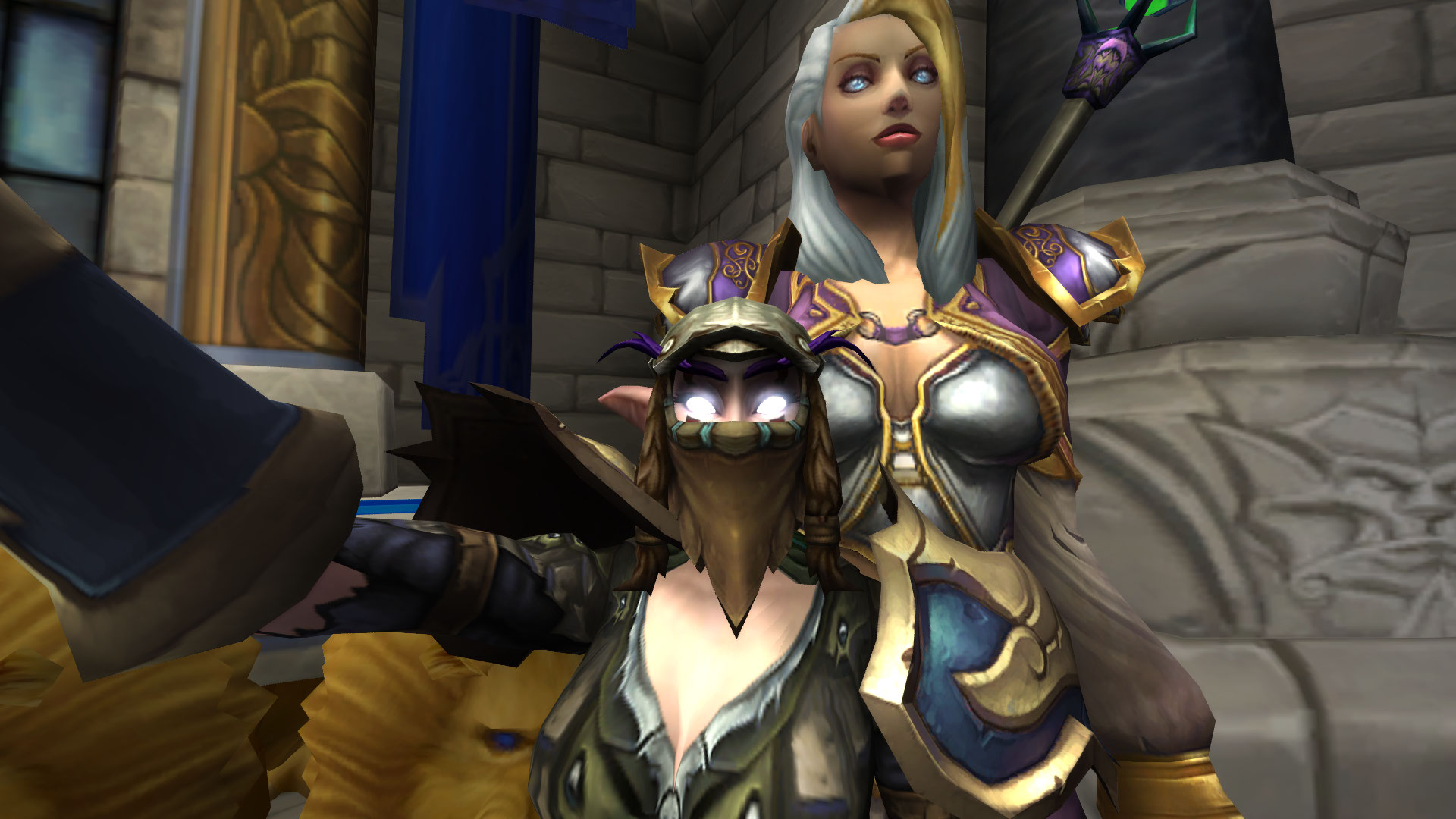 I’ve posted some screenshots last week just to show what I’ve been up to. Although the expansion is not 4 weeks old since its release on August 30, I’ve been playing the content for over a month now, which obviously includes the per-release events and the demon hunter class.

This new class is not that great since it is simply a combination of Warrior and Rogue. I don’t intend to tank with this class so I picked the Havoc spec instead of Vengeance. The dual-wielding weapon feels like I’m playing a Fury Warrior (yes, DH is also using a rage mechanic) that as squishy as Rogue since Demon Hunters only wears leather armor with dodges. Compare to other leather wearing melee DPS, Demon Hunter has low survivability rating. However, in a group content like dungeons, where there’s another player watching their squishy ass, Demon Hunter dominates in melee DPS (or so I’ve seen so far) due to their high mobility. A talent is need to have a chance for the spawn essences that can heal the DH, a mechanic I’ve seen when playing my Monk. Not to mention, there’s only 2 specs while other classes have 3 specs to choose from. The talent tree is limited also, while other class has a full sheet of talents to choose from, DH only have 1 or 2 to start with and the rest opens up by the time the DH reached level 110. That’s why the class sucks until 110. So overall, Demon Hunter is a juxtapose of Fury Warrior, Rogue, and a little bit of Windwalker Monk with an identity of its own.

I just want to say, I’m a big fan of artifact weapon, at the same time it’s lame that my character’s talent has not progressed pass level 100. All the character progression is stored in the artifact weapon. Sticking to one spec, this weapon is great, however when a class swaps specs, they lose their character and item level progression. It is not feasible to level all artifact weapons at the same time. There comes a point that the player needs to specialize on a single spec. It’s good for me since my main is a Marksmanship Hunter so I really have no reason to progress my other 2 artifact weapons. Survival Hunter looks fun and I might level the spear later but other than that, I’m happy with my Lone Wolf MM Hunter. My Paladin on the other hand, this artifact system is lame. While I use Protection spec for leveling, I use Retribution spec for instances. So progressing my Shield means I will constantly under perform in dungeons. This is typical to other classes with tank, dps, and healer spec. Losing progression in artifact weapons limits their ability to be flexible. Before Legions, if a healer of a party or raid leaves, a party member might offer to switch specs to take up on the role of a healer — that’s not possible in this case because if that class has been progressing with their DPS artifact weapon, their healer artifact weapon will remain low level and they will suck at healing. So the option to switch specs is out of the table for a while until players have maxed out their artifacts. While I’m enjoying this system, I feel sorry for other classes who like to be flexible with their specs.

This is an improved version of the Garrison…or is it? First of all, I love my Engineering and Enchanting shops in my Garrison. Second, I receive constant flow of resources delivered to my Garrison. Third, I have a lot of followers and I can have 20 of them active at the same time. The Order Hall is not very user-friendly since there’s no resource delivery, shop profession shops, and there can only be 5 followers active at the same time and it cost 250g to switch them every time. Other than this, the Order Hall is just another hub for players with similar class and the local chat is very informative and helpful at times. The best part of the Order Hall is, it’s not as lonely as the Garrison because I can interact with other players. I can just hang around and listen to people boasting about their spec or watch Beastmasters show off their latest tame. My biggest beef is the lack of resources and the high cost of things using resources. There’s no other way to gain resources other than World Quest, Rare spawns, and treasure chest. Only the World Quest recycles and after a while, I’m resources starved.

This is the best thing ever. Rather than a static daily quests, instead its a rotation of many quests with many objectives and respective rewards. I’m a firm believer that grinding is an act of repetitive actions with less than appropriate reward (just like fucking GW2 where quests are grindy as fuck, but I digress). Having to do the same WQ a couple days later with a different or improved reward is not my definition of grinding. The objectives may be the same, but the reward makes it a whole new quest altogether. The best WQ I love the most are the quests that rewards epic gears where I’ve picked up a couple of my ilevel 840+ items. My only gripes, and it’s a positive gripes, is the fact that there’s so much to do that I have no time to play my alts.

Ok, I’m on a fence on this one. There are times that I really want flying because of the fucking High Mountain map and there are times that I don’t mind it at all only because they’ve added an Azeroth UBER system. I believe I received my whistle at level 110, I’m not sure, but this item allows me to call on a taxi and port me to the nearest fly point. It’s an awesome item that alleviate the need for flying mount. However, not having flying means gathering materials sucks especially mining and herbing. Then there’s the annoying High Mountain map design. I understand that it’s a mount and the path will force players to go around all the time but going up is as bad as going down. At least, since I’m an engineer, I’ve augmented my cape to have Goblin Glider so going down is not as bad, but going up is a pain in the ass. Flying is needed in this zone and it needs to be account-wide unlock so my alts don’t have to suffer. But that’s my hardcore side talking because my casual side is very happy with the way it is. Flying is a welcome feature but my casual self don’t really mind going around on a ground mount. However, they can always increase the speed of the ground mount to 200% in lieu of flying.

The dungeons are a joke in both Normal or Heroics. It always have been and I believe it should remain that way. However I’m not very about the fact that there’s an increase in trash mob’s number and difficulty but they don’t give a lot of EXP. This is why it’s not even worth running unless a quest forced me to run it. A lot of my profession quests required a dungeon run and it’s a good thing that it’s a joke and not some sadistic dungeon design found in GW2. I’ve only ran each dungeons in normal and some dungeons in heroics, it’s not that great in terms of EXP reward and item reward, but it’s a fund instance to run once in a while.

My top classes are Hunter, Paladin, Mage, and Shaman and the rest are just to fill my cravings for alts. I’m still learning how to play my Warlock and Deathknight — they are not my cup of tea but they are interesting. My Marksman Hunter is great in terms of burst but she cannot maintain the DPS only because she relies so much on procs. Waiting for Lock and Load and Hunter’s Mark of proc means I’ll be spamming Arcane Shots while dumping focus on Aimed Shot. I missed Steady Shots already. The fact that Aimed Shot now have 1.7s of casting time really put a dent in my DPS. Since Aimed Shot is the source of massive damage and burst, it’s frustrating that that casting time is too long. I’m personally willing to take a 10% damage nerf to Aimed Shot if the casting cost will be reduced to 1.2s. Other than this, I’m happy with my Hunter’s ability to deal burst damage flawlessly just as how it used to be when Hunters have mana instead of focus. Ever since they’ve changed the Hunter’s resources from mana to focus, I hated it until now. I think they’ve finally found the right solution to Marksmanship and I’ve never had so much complaints about it. Another thing also, Windburst (Artifact ability) should not cost focus or at least the cost should be lower than it is now because it gets in a way of Aimed Shot in a rotation. My Prot Pally is smooth but I cannot say the same with the Retribution spec. My Frost Mage is just like my Hunter since she uses Lonely Winter and I’m having a blast with it. My Shaman is still a mess since I’m yet to find the right talent combination for her. My Rogue is Subtlety and it’s how my GW2 Thief should be — a fun class to play. My Fury Warrior, WW Monk, and Disc Priest are work in progress. Warlock and Deathknight are in the back burner. My Demon Hunter, sigh, I don’t know, every time I try to level him I get bored and switch to my Paladin instead. So overall, I’m happy in parts where it matters.

The big picture is, this is a successful expansion in my book. Although it needs a lot of QoL changes, I can still live with it and have fun. Blizzard and I have the same understanding of what “fun” means where as GW2 and SWTOR has skewed definition of “fun”. So expect that I’ll renew my sub indefinitely since there’s really no reason to stop playing now.