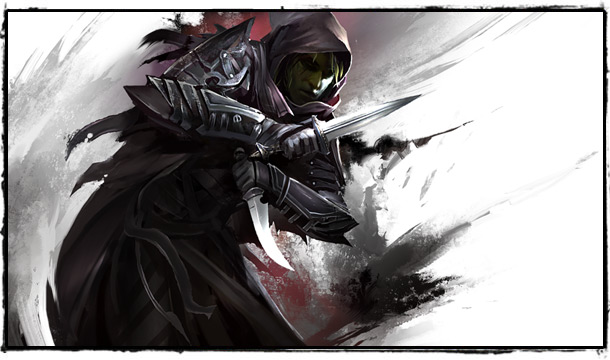 Even though I’m not as active as I used to in playing GW2, I still login once in a while to try new builds. Since the current meta in WvW is all about tanky and bunker builds, it becomes necessary for my Thief to build against it. This is my WvW anti-bunker build.

D/P is a must in WvW regardless of what build a player uses. The utilities in D/P is simply unmatched. Sure I could choose D/D for maximum condition application and it’s not out of the table. However, if I choose D/D, I would have to bring a different set of utility skills. P/D is not an option for this build since it is built around Poison as the primary source of damage. I choose to have my utility skills to deal condition damage rather than having to spend initiatives for it, thus D/P is my choice.

This skill has a simple reason why I’ve chosen it. It simply has the lowest cooldown with a high amount of heal — plus it’s an endurance refiller. Hide in Shadows is also an option, however that role is already filled by Shadow’s Embrace and Shadow’s Rejuvenation. Having the ability to go in stealth every 3 seconds makes Hide in Shadows obsolete or unnecessary redundancy.

I simply picked the skills that deal poison. There is an argument to diversify the kind of conditions like adding torment, bleeding and confusion. However, adding those types of conditions is really unnecessary. Take a Thief for instance, they have a skill that removes 3 kinds of conditions. By staying with one kind, I effectively suppressed the Thief’s cleanse since they won’t use a cleanse with a long cooldown to remove a single condition. Another example is when fighting against a Necro who can transfer conditions, so when they transfer conditions to me, I can manage it rather than being overloaded with the conditions I’ve applied. There’s still a source of bleeding (Needle Trap), but I believe that this is enough to accomplish my goal.

This is actually up to personal preference but I find that Basilisk is still the most effective skill for this slot. Arguably I could have chosen Dagger Storm, but the problem with DS is it’s long ass cooldown.

The effect from Lotus Training is great, however it is not important. What’s important is to have the ability to maintain mobility and have a way to close a gap — both of these are accomplished with using Dash. Besides, 10% more condition damage is not really that great compared to 10% damage reduction plus mobility. There will be situations where I would need to dodge while in stealth, for instance when I’m trying to close a gap, and Lotus has a tendency of prematurely revealing me when one of the missiles hits a target in range while dodging.

The play style is no different than using a Power D/P and the only difference is the type of damage being inflicted to the target. I would still go in stealth as much as possible and my backstab will also apply poison on top of the direct damage. The key part of this build though is stretching the poison. Dagger auto-attack can apply poison, so the utility skills are there to apply pressure and force a cleanse. Shortbow #4, Choking Gas, Impairing Daggers and Needle Trap would be enough to apply pressure to force a cleanse. Then while the target’s cleanse ability is on cooldown, I would swap to D/P, stealth, pop Basilisk, then backstab. From here, I would use up the last Basilisk proc then activate Spider Venom to apply a huge stack of poison. It’s about being patience and good timing. I wouldn’t want my venom’s poison being cleansed since it’s on a long cooldown. So I would wait for an opportunity before I use it.

I’m sure that the weakness of this build is fairly obvious, which is, it cannot handle boons. By sacrificing Trickery to take Daredevil, survival vs efficiency, this build suffers when the target can stack up a lot of buffs. Although, dropping Daredevil for boon strip will set this build back because it will no longer have access to a lot of skills and traits that come with the Daredevil. This is the main reason why I’ve chosen to apply poison and only poison because not only it does condition damage, it also restricts the amount of heal the target receives. In addition, thanks to Lotus Poison, it applies Weakness which reduces the target’s endurance regeneration by half and a high chance to fumble. So even though I cannot strip the buffs, this build will make those buffs less effective. The best part of this trade-off is that with Daredevil I have access to a skill that applies slow which makes interrupting skills much easier. So after weighing in my options, I’ve decided that it’s worth the trade. Overall it’s a fun build to run.