In the Path of Fire expansion for the game Guild Wars 2, one of the Elite specialization added to the game is the Deadeye; an Elite Specialization for the base profession Thief that will replace the Daredevil spec…or will it?

I want to highlight that the intention of the Deadeye spec is to give Thief a ranged weapon farther than 900 range. In addition, to also give the profession the highly needed survivability. Staying out of melee range between 1200 and 1500 improves the Thief’s survivability. Not only that Thief can now engage in range combat, they have an Elite skill called Shadow Meld. But first, I want to point out that Shadow Arts is the only magic school that has not been fully explored with creative design. What is Shadow Art a.k.a. Shadow Magic?

Shadow Art was first introduced in Guild Wars Factions as the main magic of Assassins. Shadow Art is used to silently shadowstep, a teleportation magic that uses the surrounding shadow to displace one’s self, to a target for a quick kill. Assasins also use Shadow Arts to apply hex and debilitating conditions on their would be victims. In the anime series Naruto, we are introduced with more uses of shadow magic, thus it is fitting for ArenaNet to explore this very interesting magic. For the last 5 years, there were no improvements to Shadow Arts to a point that I once suggested that they create an Elite spec for the Thief and call it Arcane Thief. This Thief will expand the use of Shadow Arts by stealing boons and applying conditions. Of course, I trust that ArenaNet can come up with something even cooler, thus now they have introduced the Deadeye. 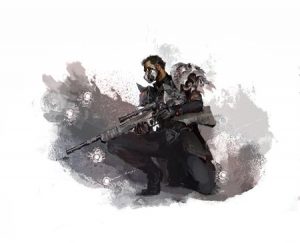 Shadow Meld is the single skill that defines that the Thief is now fully embracing the power of the Shadow Arts. The name Shadow Meld was first introduced in Guild Wars as an enchantment that functions no different than the Sword’s #2 skill, Infiltrator’s Strike/Return. So seeing that they took the Shadow Meld name and actually apply an effect that perfectly compliments the name is a ray of hope that shows that ArenaNet is finally getting their shit together. So what makes Shadow Meld so good? Here’s the (unofficial) description of the Elite skill:

Very simple, straightforward, and powerful. So this skill has a cast time of 1/2 second meaning it can be interrupted, but that’s fine for balance sake. It has 2 charges that I can use consecutively. The 5 seconds CD in between charge use is a 1-2 second window of opportunity, but that window can easily be shut because Shadow Meld is not the only one skill that exploits that full extent of the Shadow Arts. The reason I like this skill a lot is because of the number of possibilities I can do with it. With the Deadeye spec, I don’t really have to use the rifle. I can use P/P and D/D and Shadow Meld compliments both. This is the kind of game design that was expected in the Heart of Thorns expansion, where the Elite spec adds into the profession and expand the choices for players, not limit them. Daredevil is a good Elite spec but it has a tendency of pigeon-holing players to a certain build. I cannot find any information about the traits yet and I hope that it compliments Shadow Arts in some way.

A lot of the “cantrips” uses the word “shadow” but never really explore the depth of Shadow Arts. I hope that the healing skill for Deadeye is called Shadow Form and functions similar to Reaper’s Wraith Form but heals the Thief for a duration. As for the rifle skills, I’m not really interested.

Deadeye’s Mark is the skill that replaces Steal. As a P/P user, this is a welcome skill, but as a D/D user, I hate it. Steal doesn’t only steal items, but it also positions me by teleporting to melee range of my target. Deadeye’s Mark has the same problem with Steal. As a P/P user, Steal is burdensome. However, with the Deadeye spec, I don’t think I would need to swap to a melee weapon set, so we’ll see. In addition to replacing Steal, Deadeye’s Mark introduces a new condition called Malice. It’s still vague on how exactly Malice works but all I know is that it increases damage done to a target.

In my opinion, the lamest of them all is the absence of the Dervish. It is my assumption that a rogue god like Balthazar would require the aid of the Dervish who worships the human gods and draw power from them. When Abaddon went rogue, the Dervish was there. Still, too early to really speculate anything, but as they have restored a hint of hope, I am again hopeful. Not every time a game I’ve abandoned ever succeeded winning me back, but GW2 has a chance here and hoping that they won’t screw it up.