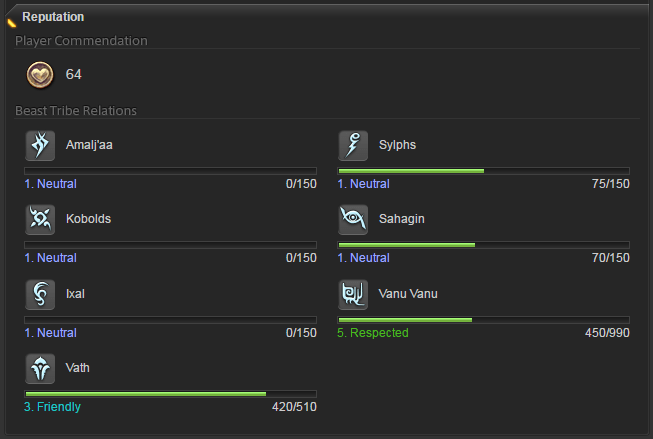 So I went to meet all the weird creatures in Eorzea in an attempt to gather enough of their tokens for me to complete my Anima Weapon. I had a really good plan and I was very optimistic on completing the weapon by the end of the month. Well, the whole thing is a bust after I verified my information.

It looks feasible enough and not too grindy. After speaking to the beast men last night, the whole crumbles due to several facts.
1) Vanu Vanu, despite having Respected reputation with them only gives 3 quests even though there’s already 6 different ones I’ve unlocked.
2) Sylph and Sahagin don’t reward token at Neutral reputation. I was under the impression that it would put me at least as Friendly status since that’s the starting point with the Vath.
3) Sylph and Sahagin require at least 361 reputation points to reach Friendly. They only grant 3 quests per day worth 5 reputation points each for a total of 15 reputation points a day. I’m currently at 75 points so it will take roughly a week just to get to Recognized status.

I have to come up with a different plan so instead of playing last night I did some research on how long it will take me to gather everything I need to get my Anima Weapon. The Slyph and Sahagin quests award 5 reputation points at Neutral status and 7 reputation points at Recognized status. At my current level of 75 points, it will take 5 days doing 3 quests a day to reach 150 points for the Recognized status. From this point on it will take 10 days to reach 360 points at 7 points per quest doing 3 quests per day. So it will take me 15 days just to reach the point where I can earn some tokens. The good news about Slyph and Sahagin quests is that they also grant 3 daily quests which will speed things up a bit since I can get 1 Unidentifiable Bone a day from each tribe. So here’s the updated rundown;

Sylph and Sahagin tokens will not start coming in until day 15 of the 24 days grind, which means they’ll only add 8 Unidentifiable Bone each for the last 8 days of the grind. This would be the original plan if I am just starting right now at my current reputation. However, I have been doing dailies for Vanu Vanu for a while and I have already acquired a total of 6 Unidentifiable Bone so far. In a sense, it would take me less than 24 days to gather all the materials I need but it will still take at least 3 weeks to complete the weapon.

I didn’t even want to start this quest in the beginning but now that I’m on the last stage, it would be stupid to stop now — I might as well finish this even though part of me is whispering, “feeeeesssheeeeeng”.