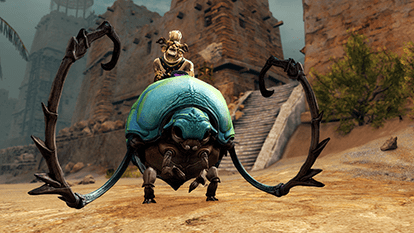 Roller Beetle – ’nuff said. I was waiting for this patch to go live so I can write a new post. Also since I have not been playing any new games lately. I took the World of Warcraft’s invite for the free login weekend just to find myself road blocked because I do not possess a legendary item. I also re-sub to FFXIV to see what’s happening with the new patch only to find that in order to progress I have to upgrade my gears. The new pre-requisite gears will cost me millions of gold to complete. In other words, I rather play Guild Wars 2.

First of all, this story is short and because of that, I’m a bit disappointed. However, the content is of high value just like the Episode 1. It includes a lot of puzzles and story quest scenario that feels like I’m playing Shadow Tactics: Blades of the Shogun. The fights were not difficult albeit challenging and there are many cues to remind me of what I’m doing wrong. Of course, I died, a lot which is part of the learning process. It is worth playing through since it has a very unexpected ending, unexpected at least for me. I mean in Guild Wars 1, Turai Ossa placed Joko under a heavy rock so even though he cannot die, he cannot do any harm either. I was expecting that we would be doing something similar to trap him forever. Well, the solution, in the end, was an unorthodox surprise, yet very effective. I was laughing for at least a minute while shaking my head.

It has been a long while since I step my digital foot in the Domain of Kourna. Seeing the Moon Fortress brought back a lot of fun memories playing Guild Wars Nightfall. The heart quests in the new map are fun also especially on how the Corsairs are delivering the supplies – very thuggish. After completing the heart quests, I had an urge to log back into Guild Wars 1 and visit Elona. To my surprise, there were so many people in Kamadan. I thought this game is dead seeing that there’s barely anybody in Lion’s Arch. Now I know that they hang out in Kamadan. I went back to Kourna and explored the Moon Fortress. The scales are not the same obviously, however, it is the same fortress. 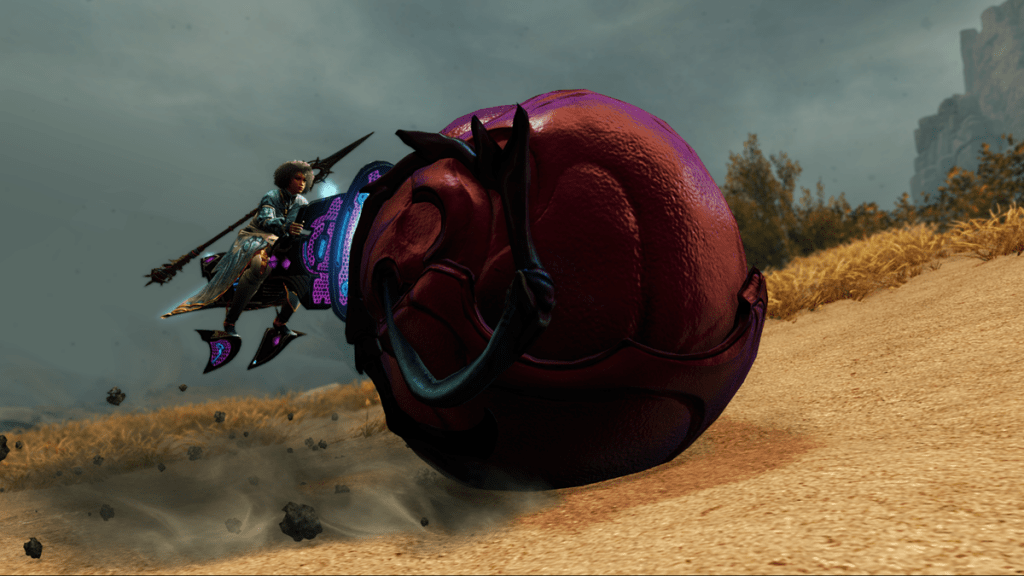 My Quest to Roll with a Beetle

Ok, I check in with Dulfy to see what hoops I need to jump through to get my Roller Bettle mount. I went and tackled the first phase by collecting secret staches. The requirement for this mount is not too bad compared to the Griffon Mount, however, it is a bit frustrating for me. The second phase of the requirement requires me to join some events. My option of joining any event is very limited due to time constraints. I need to be really lucky to be able to join a group to get my Shadow Creator’s Seal, Anomaly Spark, and Power Inventer. So far I only have 4 out of 7 items needed. Looking at the final phase, it shouldn’t be too bad. It’s worth it since this thing can travel so fast it’s crazy.

Just like the Griffon quest, I will spend a lot of time trying to get my very own Roller Beetle. Hopefully, I can get lucky tonight and find a group right away. Probably the most annoying will be the Ley-line Anomaly since it only spawns every 2 hours so if I missed it, I’m SOL for the night. There seems to be a bug since according to Dulfy, I should be able to purchase the Ley-infused Lodestone, but the vendor is not showing me her wares. It would be really difficult to find the event without this Lodestone so I might have to camp the areas for respawn.

According to the timer, there will be an Anomaly around 17:20 UTC-7, which is 5:20 PM my time. So my next chance for the event is 19:20. If I missed that, the next one will be at 21:20 which is very late to start an event. Typically, this event lasts about 30 minutes to an hour depending on the event mechanics. To make matters worse, the event for Mark II starts at 19:00 which is in conflict with the Anomaly spawn time. In this case, I will have to join Mark II tomorrow and Anomaly today, assuming that I didn’t miss the 19:20 event. It might take me probably until the weekend to complete this quest chain but I will have this mount by next week.

The release of the patch was not very smooth but I attribute it to Windows 10. When I first launched the game, it allowed me to go to the first scene then it crashed. Any attempt to login failed due to a network error. I investigated the cause and found that Windows 10 is hoarding my RAM again by allocating 98% even there’s no application running other than itself. I rebooted my computer to dump the memory and Googled a fix to this everlasting nonsense that seems Microsoft is not interested in fixing. The fix had me make a change in the registry and it seems to have worked. I was able to connect without error after that and was able to finish the story.

For the last two weeks, this achievement was broken since many chests were not resetting properly. It is completely random judging from what I’ve read online of which chest is broken. Fortunately, the fixed this bug and I was able to complete the achievement. The daily chest key quest still happening and I have many keys in my possession so I’m wondering if the achievement will reset the third time. I do not possess enough infusion to purchase the underwater breather so I would assume that it will reset. If not, I guess I’ll have to buy the infusions from the Trading Post. I don’t really like how the ascended breather looks like, I simply want to be able to swim faster.