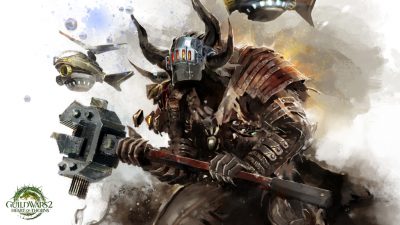 I have not created a Charr in Guild Wars 2 due to the stigma from Guild Wars about the Charr searing everyone in Ascalon. I never like the Charr culture, their demeanor, and the Charr characters overall. Their militaristic society looks pretentious and seems like everyone is simply playing soldier. So I have no Charr character until now.

The first thing I don’t like about the Charr is the character design. The armor in GW2 looks different when worn by a male or a female. In case of the Charr and Asura, they all use the male model for armor. This is very irritating when I see the female Charr covers their top when naked, but exposes them when wearing certain armor. Obviously, it is due to the fact that male characters have no problem exposing their nipples. This gross negligence in armor design is a clear violation of player immersion.

Bipedal or all four?

Another thing I dislike is the Charr’s walking animation. Sometimes the Charr will go on all four, running like any animals with 4 legs, but continue to travel at the same speed as they were traveling on two legs. The inconsistency in walking really bugs me just like the inconsistency in armor design bugs me. They should have just reserved the all fours if the Charr is sprinting or have a speed boost, or better yet, don’t go on all fours at all. This inconsistency ruins a lot of jumping puzzles for me.

There are three paths to take when it comes to the personal story. None of the paths leads to a good storytelling. just like all the other personal stories, they are all poorly written. I guess one can argue that the whole personal story leading to Zhaitan sucks. I just have to overcome all these and get to the first expansion as soon as possible.

The need for Scrapper

I already have a Norn Engineer and she fit the Holosmith very well. I never really like seeing the Norn running around with a hammer. They simply look silly. There’s also a choice of making an Asura since they carry the hammer as easily as someone carrying a bat, but they too look silly. The Charr is perfect for wielding the hammer and they are already natural engineers so it makes perfect sense.

My Charr started off with the story about her father died as a soldier. I tried the other choice of having a father that is a gladium, a.k.a. outcast, and I didn’t like that story. The soldier story is better since it includes treasure hunting. Then I elected to join the Order of Whispers only because Tybalt is there. I mean I could have gone with Sieran again but I like the Whisper’s path better. I really wish Trahearn was not the focal point of the core story.

I would basically build a Scapper powerhouse making my Charr a fearsome character. The main focus will be taking advantage of the hammer’s ability in handing out Vulnerability like candy. So I have to get gears that will grant the best boon duration at the same time taking advantage of the might stacks. Based on my theorycrafting, I will require both Commander gear and the Daredevil runes. I’m still contemplating what traits to bring with my scrapper. Tools + Explosives are good combo, so as Firearm + Explosives. I’m going to have to try both and see which is better.

So far, Ywanqa is level 71 Charr and finally reached Fort Trinity. There will be no heart quests in Orr so I don’t really remember how I did it with my other characters. Once she hit level 80, or maybe level 78, I’ll go directly to Maguuma Jungle and push to get the Scrapper Elite profession. My Norn Engineer have both Scrapper and Holosmith so I don’t think it will that heard to get it. The real challenge is not getting bored because when that happens, I will end up playing another game.