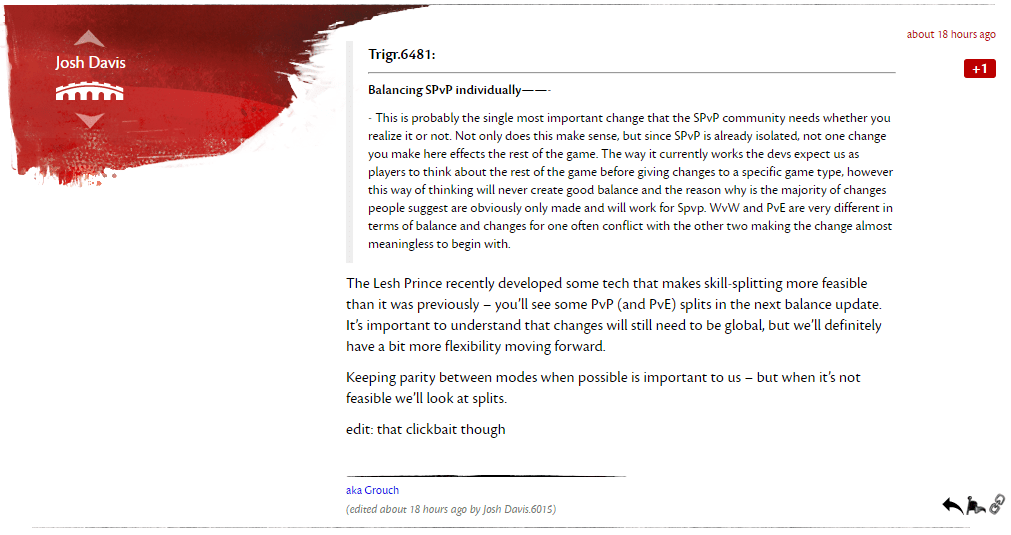 It’s about fucking time. Three years too late and it took Mike O. to helm the production to get this thing into the dev’s thick skulls.

From a GW1 player’s point of view, this is very disappointing. They’ve known then that the only way to make players in different parts of the game happy is to split the skills. They’ve already come to that conclusion in GW1 and it has solved a lot of problems many players have.

You want to balance the skill in dungeons, create an environmental effect that nerfs certain skills. You want to balance a skill in PvP, split the skill and nerf the PvP version. Skill too weak in PvE, split the skill and buff the PvE version. The only reason that they’ve insisted on global skill balance is based solely on laziness — they don’t want to do a lot of work because splitting a skill means doubling the work. That is not necessarily true.

Before Mike O. took over, every Dev has to evaluate the skill change because a global change affects everything; from general PvE to PvP to WvW to Dungeons/Fractals. That’s too much unnecessary work. If the proposed balance change is driven by PvP, the change should remain in PvP, meaning splitting the skill will remove the necessity to have other teams to have to evaluate the skill on how it will affect their content. Refusing to split the skill have been proven to be much more work than needed. Nerfing a skill because it’s too good in PvP, split the skill and talk to the PvP devs. Saves time, money, and less frustration to many players who don’t play in PvP. Isolate the problem and fix it locally. Globalization is less efficient and a lot of people getting left behind due to lack of representation.

Mike O. is the only person in GW2 who is a real player, IMO. He shares the frustrations of many players simply based on the decisions he’d made, and is making, and the direction of the company is going so far. He’s focusing on polishing the game rather than adding unnecessary and stupid contents. As the day goes by, it makes me really happy as a GW2 player that Chris Whiteside and Colin Johanson no longer work for ArenaNet. Their departure has removed the shrouds from the game and hopefully, in the near future, that GW2 be the kind of game that it was meant to be in the beginning.

I’m starting to spend money in GW2 again, which should serve as a good sign that I’m starting to like the game again despite the fact that Black Desert Online and Overwatch have taken over most of my play time. The updates need to arrive a lot sooner though — the long wait and the volume of changes are not very promising. I’m still waiting for a meaningful update to my Thieves.