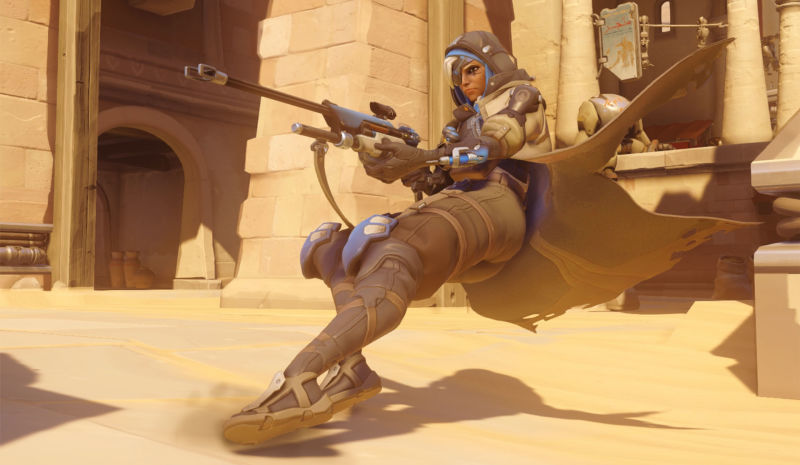 There has been so much hype about the new Overwatch hero and there has been a lot of speculations on who is going to be and what this hero can do. But first, my current game stat update.

Well my stats is not that impressive but I’ve kept my win rate above 50% (it was 51.1% a couple of days ago). Unfortunately, my rank had dropped to 49 rating from 52 only because it’s hard to perform well when my team is not even trying to win. My top 5 heroes have changed also since I’ve started using Mercy more than Widowmaker. My full stats is located here.

Now about Ana. The concept that she’s a sniper with scoping ability but cannot headshot is pretty lame to me. In addition, the fact that her damage and heal uses the same set of ammo makes her annoying to use. For instance, when playing Hanzo or Widowmaker, I can snipe targets while my ally partially blocking my view — the bullet will go through that tiny gap to hit my intended target. With Ana, the bullet will instead heal my ally rather than hitting my intended target. On top of this annoyance, she has zero escape. As a healer, Mercy can fly back and forth between ally giving her the best healer mobility in the game. Lucio can speed boost himself out of tight situations. Ana had none of those, instead, she has a sleeping dart. The sleeping dart is not a reliable get-out-of-danger-card rather it is very good at delaying a push by tagging the enemy tank or their healer, however, other than that it is used to stop an ult. When a Genji, Reaper, or Soldier 76 gets close, she’s as good as dead. Speaking of Genji, STOP DEFLECTING MY SLEEPING DART!!!

The concept of a sniper healer might be intriguing at first, but I doubt that I would see her in a lot of play once the hype died down. I can’t think of any map where she can shine, she’s just that lackluster. However, one way to fix her is to make her bullet toggles between damage and heal. This way an ally in the way won’t unintentionally get healed when trying to damage the intended target. Zenyatta can heal and deal damage, too much damage that he doesn’t require to have any kind of mobility. And nobody in their right mind will ever chase down a Symmetra.

The advantage of Ana over other healers is her Heal Granade where she can do an AoE heal or poison depending on who’s in the area. The problem with this ability is that it is counterintuitive to her design. She’s designed to be a back line but her most effective skill is short ranged. If they can redesign her rifle to have a grenade launcher that allows here to launch this grenade at long distance, it would make her a more useful and might actually see play since it is a very good support skill while maintaining her distance.

I sure hope they reiterate her skill set and make her less annoying to use.