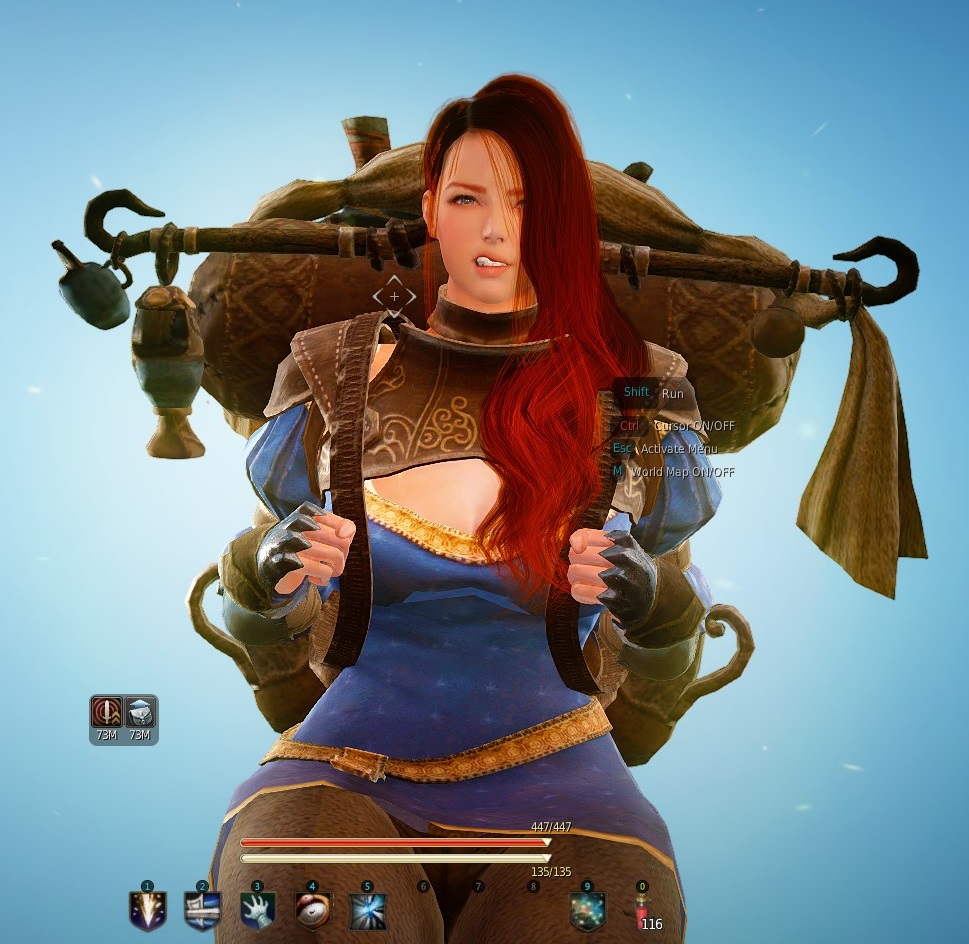 I’ve finally decided to purchase Black Desert Online since the free character creation application campaign they’ve released have turned me off. I thought that this is yet another TERA or ArchAge game that are all looks and no depth — and I’m proud to say that I’m 100% wrong.

After buying Heart for Thorns for $50, an expansion to GW2 and not a whole game, I have been hesitant to purchase any more games more than $39.99, let alone a $50-$70 expansion (glaring at you Legion expac). So I totally dismissed Black Desert and not even wanting to have anything to do with it — the burn from other games still stings.

After the game launches, one of my favorite website (Dulfy) has given Black Desert a dedicated page and after reading some, it piqued my curiosity. So after a couple of months, BDO was released on March 3rd in NA, I’ve finally visited the game’s website to check it out since I’ve been reading a lot of positive reviews about it (despite the controversies surrounding the ESO guild sabotaging BDO in rating sites). To my surprise, the game only cost $29.99 for a Traveler’s pack and $49.99 for Explorer’s pack. The Explorer pack has nothing that enticed me to fork-up another $20, so I purchased the Traveler’s pack. I still ended up spending that extra $20 in the perl store since I find it worth the spend.

Downloading the game was the worst part of this experience since it is 32GB and it took about 2.5 hours in my fast connection (the 5hrs timer made me depressed a bit and I’m glad that it was misleading).

Navigating to the character creation is easy since I’ve already played around them when they released this portion of the game as a marketing hype tool. The character creation is a bit too much in my opinion since none of the little details will be noticeable like the neck length, seriously, how can you tell if my character’s neck is longer than yours, but I digress.

So ok, I purchased the game Saturday night and played through Sunday and the first 24hrs has been full of activities and a great depth. There’s a lot of choices. The classes are all awesome and being an altaholic, I’ll have a character for each class soon enough. For my first character, I’ve chosen a Valkyrie, a bit more tanky since she will become my “bread winner” for the rest of my alts. I could’ve chosen a Warrior but that’s too generic, also the Valkyrie reminds me of Asuna in SwordArt Online being a fencer and all. Sure I rolled a Valkyrie but that doesn’t mean she cant cook, farm or trade. My first attempt is trading and it’s amusing how my character look when carrying a trade pack (see feature image, she’s angry). Then I calculated the time spent per profit, I found that trading is not worth it walking. So when I received my first mount, the donkey, it’s way more acceptable but still not worth the time. I’ve seen a lot of people fishing but it’s not something I want to do in the meantime because I know how I can get sucked into doing just that. So I decided to focus on learning the lore instead and opted into talking to people (NPCs).

So I load into the world of BDO and was immediately attacked by a creepy homunculus-thing (reference from Full Metal Alchemist) — yeah really creepy and the sound makes it even more terrifying. The tutorial is very good since it introduced me to my class in an acceptable pace. There’s also a mischievous quest where this homunculus thing is trying to get me killed but my experience with MMO made me combat savvy enough to survive it. I haven’t died until I got surrounded by the scarecrows, which was my fault trying to chew more than I can swallow. After a while, I learned how to control the mobs and how to combo my skills. The mount system is something new, since my donkey don’t despawn after unmounting and will stay where I left it. So if I am really deep into enemy territory, I can’t just call my mount and run out of there — I have to literally fight my way out to get to my mount. So afterwards, I just leave my mount in the camp and walk on foot to the quest location. There’s an item I can acquire, a flute, that allows me to call my mount from a great distance, but I find it unnecessary for now. 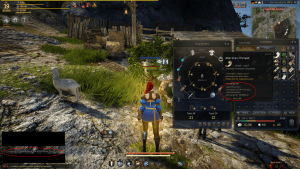 Later around level 14, I found a spot where I can farm decent amount of money at my level. There is this hidden goat farm on top of the montain where you can trade 50 imp trumpet for 30,000 silver. That’s more than other trophy NPCs offer, so I killed a lot of imps and traded 150 of them and it’s an easy 100k in less than 24hrs of gameplay…not too shabby seeing that a lot of items in the marketplace are too damn expensive. 800 silver for a mug of beer…get out of here. So I stayed here until I’m level 19-20ish before moving on and I currently have 5gold bars in my warehouse, that’s 100k silver per gold bar, in less than 24hrs. The money making system of this game is really generous however it has an effect on the game economy making everything expensive but not unaffordable.

Speaking of beer, after a while I learned how the node system works and what it means to have them connected. It’s a game of logistics and it’s something that adds more depth to the game. It requires planning which route to take and which resources to gather. For each node, there are opportunities to gather resources. The first resources I’ve chosen to gather was the copper since I found it everywhere near where I’ve summoned the boss by the beach. Then I tried to hire workers only to find out that it requires lodging to hire more than one — more depth. To activate a node it requires contribution point, which is earned by simply questing, so running out of contribution points means I need to get back on my quests. The best part of this is that the map progress is not lost when I change character. Which means, my alts can help increase my contribution level. I found this out when I decided to see if having an alt in a different city makes it better in moving items, so I rolled a Maehwa. Unfortunately, it didn’t work as I expected since there’s a 10 minutes cooldown after switching character. I can’t speak to a trader, I have to wait 10 minutes. Oh well, so I start farming contribution points through questing my alt. The reason I’m farming these points is so that I can rent a house to lodge my workers and to connect the nodes. I need one worker to mine the copper and one to farm potatoes for beer making. Each node requires 1 contribution point. Beer is used to restore the worker’s stamina and making them requires cooking. Later on, when I have several node connected, I sent my workers to a better node to work on for better profit — since the trumpet farm has a diminishing return when my level went pass 20.

My next money farming location for level 20+ is the Naga in the Glish Swamp since the exchange for the web feet is 150 webfoot for 100k silver. That’s not too shabby since there’s a lot of quests concerning the nagas and after these quests, it’s an easy 100k – 200k depending on how lucky you are when it comes to drops. There’s also another trophy that I am yet to find out about. Somehow along the way I ended up with a couple of Stoneback Crab Rock Armor. I found these mobs while trying to get rid of the triangle-head lizards. These armor trophies exchanges for 5 armor for 4,500 silver — that’s 450k for a stack of 100 rock armor. However, given that I only got 2 after killing about a dozen of them, it might not be worth the time since they are a pain to kill that it requires for me to knock them down to expose their belly. Their armor is as it says, hard as a rock. With my Valkyrie, I found out how to flip them over using my Capt. America shield throw skill. I’m only level 24 so I have not spent enough time to see if this is worth farming. My Maehwa might have a better way of farming these guys since she has a lot of attacks that tosses the mob around. 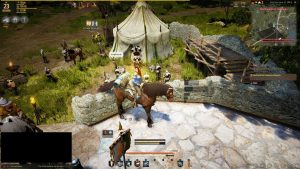 All in all, my experience is 100% positive in my opinion. I can’t shake the fact that this could have been how GW2 and ArchAge are supposed to be. GW2 has as an awful economy and very grindy even though by that definition I’m grinding in BDO. To me, the feeling of “grind” only happen when I do stuff and not getting my expected reward. So in BDO, I look at how much I spent in collecting the trophies and see if the return is worth my time. In GW2, there’s nothing there that is worth my time and even Silverwaste is borderline worthless. In ArchAge, the trade system was great, however, limiting the housing for only those paying customer is bad in my opinion. That’s the one thing I hate is when the game forces me to pay extra to have my fun. In BDO, I paid for the game and I get housing that I can use for storage expansion, worker’s lodging, crafting, and residence. The only thing that cost real money is if I choose to buy the item in the perl store (which I did) instead of crafting them myself. I would gladly pay one-time for ArchAge if I can get housing forever. Too bad, that’s not what the game is about. I paid full price for GW2 and even for an overpriced expansion and still having to feel like I have to beg to get a decent amount of funds just to afford anything. Once I feel that I’m being gravitated towards the gem exchange is the time I stop playing the game.

So, it is fairly obvious that I would be spending a lot of time in BDO since it is very solo-friendly and everything is very reasonable despite the fact that things might look expensive, but they are not unaffordable. I rather grind in BDO and get the expected reward rather than grind in GW2 and have nothing to show for it. The Valkyrie overall is a good class however when it comes to flashy skill animation, Sorcerer is by far the coolest. I gotta have one of those.