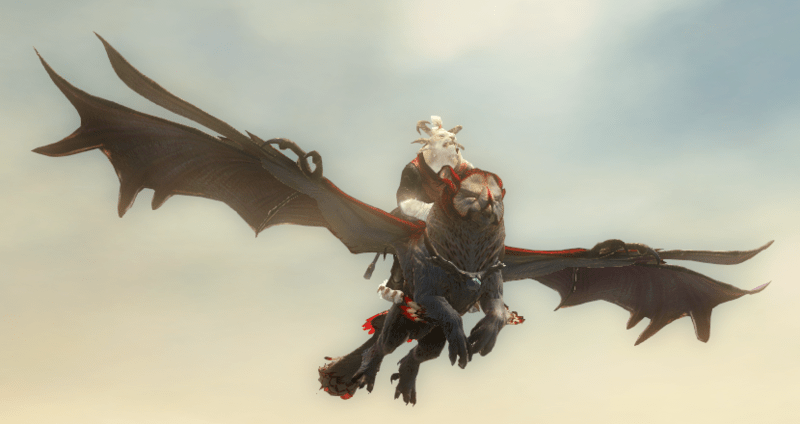 The Griffon is a hidden mount in GW2 and it implies that it can fly. When ArenaNet introduced mounts into the game, I was wondering if they would also add a flying mount since we can already glide. The Griffon can fly, but it’s not like any mount I’m familiar with.

In World of Warcraft and Final Fantasy XIV, the flying mount is what I’ve always expected and they function the same way. Since Guild Wars 2 already have the swimming mechanic, something that FFXIV originally didn’t have, they have the template for flying. I’ve seen a lot of flying mobs already and they also introduced mounted mobs and it’s just a matter of time before they put 2 and 2 together — now we have the Griffon. However, the Griffon is not flying similar to the mounts in other MMOs and it’s more like an extended gliding, meaning it cannot go vertical nor hover.

The Griffon loses altitude over time just like gliding but at a slower rate, thus I can glide longer before hitting the ground. ArenaNet used the stamina bar in an interesting way by giving the Griffon a way to push itself upward by flapping its wings. The mechanic is similar to my character catching a small updraft to extend my gliding distance. I’m not quite sure what the exact cool down they’ve put for the stamina but it seems like it’s 5 seconds, so every 5 seconds or so, my Griffon can flap its wings to create an updraft. I wonder if this mount can benefit from an actual updraft. So far, that’s all I know about this mount while trying it out in-game. I have not been able to see what the mastery tree can do for the mount — hopefully, it can go vertical.

To get this mount is not an easy or cheap experience since according to Dulfy, it will cost me a total of 250g which unfortunately I do not have. So, doing things in game to earn that much gold will definitely take me a long time or I can bite my tongue and buy the gold for $20 through the Gem Exchange. This is similar to World of Warcraft selling their $25 mount in the Blizzard store. However, the difference is that Blizzard’s mount is purely cosmetics and I can get a mount in game without spending a dime that has the exact number of functionalities as the one in the store. However, I have an option to get the Griffon without spending a dime, albeit it’s going to be a long time before I can get one. The Blizzard store mount has no way of getting it without paying.

Since the Griffon is not a necessary mount, I’ll play through the game with each of my Alts and pool all their money and see how much I have — I have a lot of items to sell that just collecting dust in my Alts’ inventory and I have 10 Alts.

The first feeling I had when I saw that 250g price tag is regret. I’ve put a lot of resources into the TEEF guild that I could have used to make money and buy this Griffon right now. I know at one point I have almost 200g and I really didn’t have anything else to buy until now. However, I made that much gold before, I can make that much gold again. I am trying to bring my Necro through the story and I’m now finding out that my Reaper is not as effective as I think it would be. I don’t think it will take me that long to get every Alt through since the story is not that long and they made a very interesting story that deserved to be re-played.

So for now, the Griffon will be on my to-do list and I will concentrate on taking my Alts through the story — all of the story starting with Personal Story that I have skipped. It’ll be a busy time for me until they release the next Living Story.