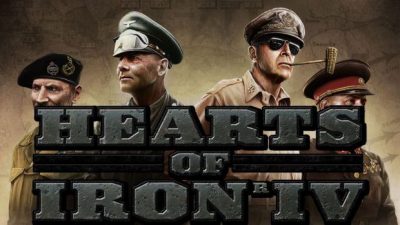 I’ve been waiting for Hearts of Iron 4 to go on sale and it finally did for $16 and I bought it without hesitation. Paradox Interactive is the same game company who made King Arthur 2: The Role-playing Wargame, Mount & Blade: Warband, Pillars of Eternity, and Stellaris which are games I owned and really enjoy playing.

Since this game is based on World War 2, I really want to play as France and see if I can defeat the Axis Germany or if France is really fated to fall. I’ve run many scenarios already to learn how the game works and every time I have not been successful in preventing the Germans from crossing the Maginot Line and capturing Paris. By the time the war broke out, Germany has a massive army and it just punches through the line and at the same time Italy is attacking the Alps at south-east while the threat from Spain is also lingering from the south. France starts with a large army that can cover all the borders. However, France has a lot of negative disadvantages; Victors of the Great War (WWI), Disjointed Government, and Protected by the Maginot Line. There is also an option to go all fascist along with Germany but I have no interest in that ideology.

The Victory of the Great War is one of the country’s National Spirit. They believe that the Great War (WWI) is the war that ends all war, on the contrary, it is just the beginning. This national attitude made the French population complacent which leads to very few military factories at the start of the game. The debuff also reduces the number of recruitable personnel and lengthens the technological research for any Land Army Doctrine. Thus, the whole country of France is behind in technology and they are playing catch-up in terms of reinforcements. This is the weakness that the German Reich took advantage of that capitulated France rather easily. So in order to wake up the population to the impending German threat and to prevent a tragic future, I have to make some Government Reforms and changes to the military focus and also make an Army Reform.

The Disjointed Government gives me a debuff of -10% national unity which is really bad seeing that France starts with 40% unity thus only having 30% effective unity. This is a recipe for disaster since what it really means is that only 30% of France is willing to fight to defend it. This debuff can have a devastating effect on military morale. If I’m in the front line and only 30% of the country supports what I’m doing, it would create doubt in my mind and I will not be very effective on my job. This is one of the many reasons why the Germans can punch through my defenses really easy. So I would also need to have a defense focus extending the Maginot Line all the way to the English Channel and at the Alps at the same time going for that Army Reform which removes the Victory of the Great War debuff.

The Protected by the Maginot Line debuff cannot be removed if I choose a defensive strategy since it can only be removed if I choose to abandon the Maginot Line and go on a full offensive. The problem with this strategy is that the United Kingdom will not support an aggressive France and at the same time I will not be able to last long fighting on 3 fronts: Germans at northeast, Italian at the southeast, and Spain at the south. Since Spain will go on a civil war, I am less worried about them taking a step onto the French land, but I cannot ignore that when the Nationalist in Spain wins their civil war that they would take advantage of the situation when I’m too focused on defending against the Germans and the Italian. It is essential that I rely on the Maginot Line despite the crippling debuff of being immobile and less flexible.

The game gave me this scenario that is doom to fail and it’s up to me to figure out on how to successfully defend France with what I’ve already got and whatever else I can build before the war starts. I’ve noticed in my several play-throughs that the German army does not like a level 10 fort on the Maginot Line and they will try to circumvent around it whenever possible. This AI behavior gave me an idea on how to divert the German Army away from my cities — build forts around them. The only problem I didn’t realize at the time is that if my army is cut off and surrounded, they suffer from attrition which makes the forts rather useless. This scenario happened when the Germans had surrounded Paris and despite my two layers of forts, the city fell along with the whole country. I need to delay the Germans long enough for the English reinforcement to come in for a counterattack.

In order to build this many forts, I start my technology research on Industrial line, hiring the industrial advisor to boost my industrial research. So the first 3 tech research are; Basic Machine Tool to unlock the industrial tree, then beeline on Dispersed Industry line, second is Construction line, then last is Artillery line unlocking Anti-Tank and improving my basic artillery. Once my Artillery is fully upgraded relative to the current year, I switch it up to research Infantry Tech and keep the Support Weapons fully upgraded since this gives my units +5% defense and 5% breakthroughs. One thing I failed to consider is the bonus granted by Engineer Company and Logistics. Since being on defensive having both Infantry and Anti-tank, the Engineer and Logistics company will work well for me to keep my men to last longer. I’m sure to consider them in my next play-through.

Just like all of my games made by Paradox, this one is a definite keeper. I am yet to play other countries and it looks like it would be very interesting. Another aspect of the game I like the most is that, unlike Total War where it has both strategic and tactical (battle) maps, HoI4 is both strategic and tactical on the same map. I’ll put together another plan in order to incorporate the support company and see how well France will fare this time. In my recent playthroughs, France is lasting longer every single time so once I find the right recipe, France will emerge victorious which had me thinking if France successfully defended against the Axis, would they again become complacent? I’m sure they will not be the same France as they are now.