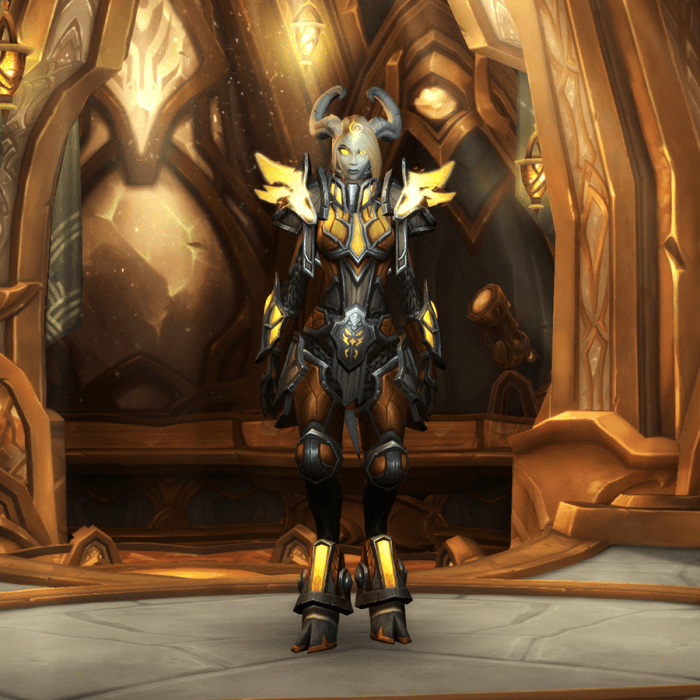 Lightforged Draenei and the Void Elf are the news so-called-race in World of Warcraft: Battle for Azeroth. So for the whole month of September, I spent my time playing in WoW. I did play other games but I am more focused on unlocking these two new so-called-races.

Unlocking the two alliance race were not too bad since Legion is an old content and my Demon Hunter is level 120 with almost 100 more item level than what the content requires. I would never do this grind while it was current just as I am not willing to do the reputation grind for the current races. Repeatedly grinding is not my idea of fun. I would however check each map every day if the World Quest is worth doing. I would do the World Quest for the sake of getting new gear. There is no reason to grind for reputation since they have no revealed how to unlock the new races; the Kul Tiran humans and the Zul trolls.

Now on the Horde side, I am very impress with the Mag’har Orcs. The Mag’har Orcs will be my next target to unlock since I’ve already unlocked both Lightforged Draenei and Void Elf. Unlike the Mag’har Orcs, the Dark Iron Dwarf can go back to whatever hole they came from. I never like the Dwarfs in Wow, especially this another sub-race. I might even complete the Highmountain Tauren although I don’t intend to make one. The fact that I am so close to exalted with my Hunter I might as well complete it. So for the month of October, I will be completing the Highmountain Tauren then focus on unlocking the Mag’har Orcs. They are worth the grind. They are simply bad ass. Once I unlocked them I would race change my Nightelf Warrior.

The story so far

I have not done a lot of the questing on the Horde side since while I’m trying to unlock the Legion races, I was also trying to level up my Nightelf Demon Hunter during downtime. I still play my Nightelf Hunter only because I really like what they did with the Survival Talent. So even though I am leveling up my Demon Hunter, my Hunter is still my main thus she has completed the Kul Tourist achievement. I have to complete the three story lines in order to unlock this achievement. The Kul Tiran story lines are not that great. The only one that I like is the story line in Drustvar. The lore is really deep and the mystery behind the witches infestation is great. The story line is very well written. The Stormsong and Tiragarde story line are both lame.

I believe that the Alliance in this expansion was slighted since the Allied race was not unlockable until the last half of the expansion. Also the fact that the reasoning of the Nightfallen was so lame even though my Hunter did as much helping them as the Horde did, for them to choose the Horde feels like a betrayal. Both the Nightfallen and the Void elves chose one side because the other side rejected them. It is a really bad reasoning. For example, the reason for the Blood Elf to reject the Void Elf is due to the fact that the Void Elf can corrupt the Sunwell, which is basically the Light. However nevermind the fact that the Lightforged is imbued by the Light so having both the Light and the Void in the same side made zero sense. Then they are trying to kill Jaina, Jaina? Really? I am on the part of the story tracking down where she’s being held – if she still lives. At least they made my Queen Sylvanas more stronger – silver lining I guess.

I’m currently playing both GWENT and Magic the Gathering: Arena and also playing through Diablo 3 Season 15. Guild Wars also released a new Episode which filled with a lot of stupid and pathetic story telling I’ve ever experienced. The new map is not something I enjoy either so after completing the Episode, I have no other reason to play. Although the new 2000 gem Raptor skin is really pretty, compare to the ugly peacock skin, so I bought it. MTGA just went to open beta and GWENT is launching pretty soon in October 23rd, I believe. Both of these card games are great compare to other card games I’ve played (e.g. Scrolls and Faeria). MTGA is a bit pricey so I’m holding off from buying anything though they have a really good quest system in play. The game plays really smooth despite the fact of the many things the goes on during a game. The game rules did change so there was a little learning curve involved since I have not played MTG for decades. Yeah, mana burn is not a thing for almost 10 years now.