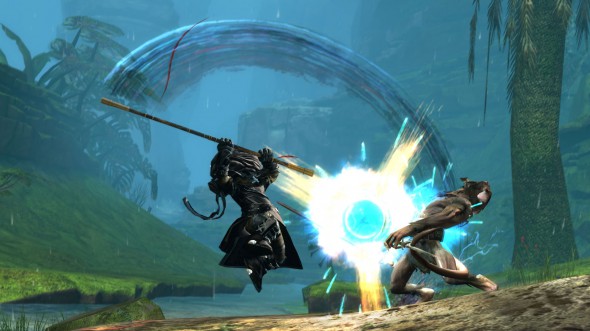 The recent details about the new Thief Elite Specialization have been confirmed. My first impression when I saw the leaked version was with high skepticism, however, seeing that they have confirmed the leaked version, it is exciting.

Auto attack — the numbers are better than the sword and the vulnerability in the end is fine too. However, the 1s cast time might be too long to actually connect with the strike. Obviously, this is a skill designed for PvE.

Hook Strike (Stealth attack) — it’s nice, but the weapon set has no access to stealth so it will be a challenge to take advantage of this skill. Similar problem we have with x/P weapon set. They really need to get rid of the “stealth attack” and change it to “flanking attack”, which requires positioning instead of stealth.

Weakening Charge (CT: ½ s, Cost: 3 init) — this is actually a pretty good skill. Actually it’s too good that it deals so much damage for the cost of 3 init.

Debilitating Arc (Cost: 4 init) — this skill will definitely get nerfed. Initially I assume that this will cost around 5-6 initiatives. There’s just too much defense in this skill; anti-immob, roll, and evade for ArenaNet to keep it at 4 init cost. But if this is kept as is, then this is a very powerful defensive skill.

Dust Strike (CT: ¾ s, Cost: 4 init) — this is the most boring skill in the set. It should be a projectile finisher to make it even remotely worth the initiative cost. This is not Black Powder where you can blind up to 5 enemies around you that pulses for 4s. This is in front of you that only blinds up to 3 targets. However the damage is not bad. The init cost is still too much in my opinion — it should only cost 3 init.

Vault (CT: 1s, Cost: 6 init) — finally teleport that is not restricted by pathing, leap finisher, and it’s an AoE damage to up to 5 targets. The damage is not bad either.

Channeled Vigor (CT: 2 ½ s, CD: 20s) — I’m mixed on this skill. On one hand, it’s a really nice heal, however on the other hand, Thief has a low max HP that most of the healing potential will be wasted as overheal. If we gain Protection while channeling, then it would be worth taking in certain situation.

Bandit’s Defense (CT: 1 ½ s, CD: 10s) — this is a nice stun breaker skill given that it only has 10s cooldown. As I’ve predicted, it would probably be nerfed anyway, which it had based on the recent Point of Interest. The CD will go up to 15s. Even still, 15s is still the shortest Stun Breaker that ever Thief have.

Fist Flurry (CT: 1 ¼ s, CD: 20s) — this is definitely a short lived skill. If they didn’t nerf this to the ground, they would have to completely redesign this or remove it from game. I can already see the combos I can do with this skill. I love it a lot and because I love it, ArenaNet will take it away. Their track record is my proof. Even at 20s CD, this skills is just too strong especially when Panic Strike is traited.

Distracting Daggers (CT: 1s, CD: 25s) — we have another skill that is a candidate for nerf. The potential lockdown of a target is so high with this one especially when it makes the interrupted skill have increased cooldown. A well-timed interrupt on a heal skill makes this too good for ArenaNet to keep. Not to mention that if Brawler’s Tenacity and Impact Distraction are traited that this skill will deal a lot of damage with a short cooldown.

Impairing Daggers (CT: ½ s, CD: 25s) — ah, the original GW Dancing Daggers with a GW2 touch. Very strong, which means it will be nerfed. That’s just too much damage for 25s cooldown and if traited with Brawler’s Tenacity, this will cause a tsunami of QQ that we’ve never seen before.

Impact Strike (CT: ½ s, CD: 40s) — if traited with Brawler’s Tenacity and Impact Distraction, this skill is available every 32s and will deal Pulmonary Impact damage if it interrupts the target. It is the only Elite Skill with the shortest cooldown. This is just too good that it feels like ArenaNet is baiting me to purchase HoT because of these awesome skills to only nerf them after taking my money.

These skills are just too good to be true and more than likely will be short-lived. It’s just one of those things that they make it look good and get me excited so I’ll fork-up the $50 for the expansion to only watch these skills nerfed to the ground post release. No thank you. Instead I will wait post release after the PvP season rolls in and see which ones are going to get hit by the nerf bat.

It is exciting to see this approach to the Thief but judging by ArenaNet’s track record, these kind of good changes for the Thief are often short lived. If they keep these changes and used this to improve the other traits and skills, then I’ll be willing to purchase the Ultimate HoT Package. Other than this, I’ll hold unto my money because I really want to get what I’ve paid for and not bait me with this shiny Elite Spec to only watch them switch it up later.