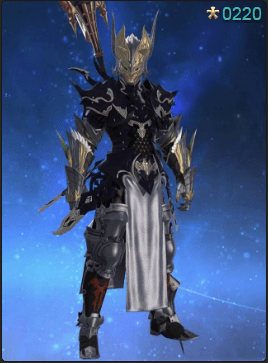 In my last post, my Dragoon’s iLevel is 158 and today I’ve managed to get items with an average iLevel of 220 — although, it doesn’t look pretty.

Probably the only real issue I have with FFXIV is the gating of progression behind dungeon completion. The bad thing about this design is that certain dungeons require a minimum average iLevel. It wouldn’t be so bad if the items required can be acquired without grinding — unfortunately, there is a lot of grinding involved. Yes, I take issue with this design only because I am being forced to grind if I want to progress. Even though I really don’t mind grinding in this game — I mean I can get lost fishing and logging for hours — I will grind only when I choose to grind.

At this point, I have a choice to grind for tomestones, which means running the same dungeon over and over again for iLevel 230 items, or level up my DoL job and make a lot of money and purchase higher iLevel items. I choose the latter because higher level DoL job will be beneficial later on. Since fish had died down and it seems that there are tons of supply right now, I choose to logging instead — my Botanist job is now level 40. At the same time, I’m leveling my DoH job, Carpenter, processing all the logs into lumbers. The money is still low at this point since there’s just so much low-level materials in the market right now. So the goal is to get to higher level and farm for the rarest materials. I’ve also upgraded my retainers so that they can farm for high-level botanist ventures.

It’s not just all making money for me since I really get bored easy really fast. Whenever I get bored I switch up jobs so there are times that I’ll be playing as Summoner, Ninja, Machinist, or Dark Knight. I’ve never put a lot of effort on playing as Dark Knight, but I find it a fun job to play. Obviously, in any games I play I’ve always favor DPS job classes more than tank or healing. So right now, I’m doing a little bit of market research to see what item I can procure that sells for a lot of gils. Lumber is a really good source of income since it has a wide range of uses. Cooking is also a good source since the ingredients for cooking are very cheap, however the revenue is not that high even though the profit is high. What I mean by that is, for example, you can buy ingredients for 10gils, cook them, then sell them for 50gils — the profit margin is 500% although you only really made 40gils after the cost. With the price of an iLevel 250 chest piece in 500k range, that will take a while before I can afford the items I need for the next dungeon. So yes, high profit doesn’t really mean affordability.

I’m currently focusing on getting my DoL and DoH job levels max before the next expansion (Stormblood) and sell everything I’ve gathered at whatever the current market price is. Hope fully along the way I can collect all the items I need to run the next dungeon. 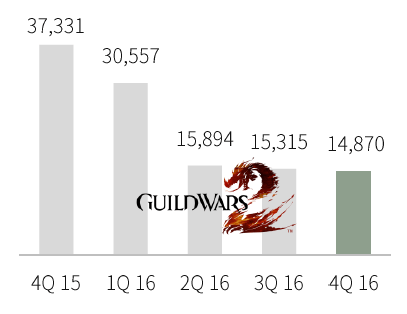 Now onto some other things, the NCSoft Earning for 4Q came out and as expected, it doesn’t look good for GW2. It’s really sad to see. It’s like watching an ex-girlfriend deteriorate because of her personal issues and I have to break up the sick relationship else I’d get drag down with her. I tried my best to help, but I’m only been ignored for so many years. Now she looks like shit and it feels awful not being able to help because she don’t want help. The only way that GW2 can recover is by going through a process of healing where the first step is acknowledging that they fucking screwed up. Without admitting their fuck ups, they will continue in this cycle of denials to a point that they are simply lying to themselves.

Blizzard on the other news just announced something that is really messed up but it’s a good kind of a mess. Players who play and grind in World of Warcraft can now buy WoW-tokens then use in other Blizzard games by converting it to Blizzard cash. You can then use that cash to purchase Loot Boxes in Overwatch, Card packs in Hearthstone, or even buy merchandise and expansions from the Blizzard store. It’s a mess because it would have to rely on people buying the tokens for $20 in the first place and at the same time, the token is only really worth $15. At some point, the exchange is not equal in value since the token has two price tags, $15 and $20, it’s a little shady in my opinion. Since there’s a lot of limitations on what I can purchase with my Blizzard cash, the token should have a flat rate of $20. However, I know that doing it this way will also make a lot of mess when used to buy time in WoW. The whole fucking thing is a mess, but of course nobody will question this since it was created to combat gold sellers. Whatever, that’s their legal problem.

Now about Overwatch, well, this has not been a long lasting game that I like to play. It’s super competitive and very frustrating at times. Ever since they released a comic strip just to show that Tracer is gay, I started feeling uncomfortable not on the fact that Tracer is gay, rather on the fact the Blizzard is starting to creep in some Social Justice Warrior shenanigan in their game — BioWare is the same thing. I’m just so tired of people jamming their agenda down my throat and now I see it everywhere. I mean for fuck sake, I get it. You want Christians to abandon their faith and accept this “sexual abomination” (according to the Bible), I get it, but for crying out loud, leave it out of the game I love. I have people in my life that reminds me of it and I love them dearly. I see it in the news, I see in the fucking NFL, I see it every fucking turn I make. Please, I get it and it’s really getting tiring. On that fact, I’m playing less Overwatch because truthfully I don’t have to put up with that shit. I just don’t want to be there when they pull another SJW shenanigan.

So that’s about it for now. Getting ready for the next expac for FFXIV, GW2 still suck ass, WoW token is shady and fucking Overwatch SJW bullshit. I just hope that when they added Doomfist in Overwatch that he won’t be a cliche BLM activist. It’s just a wrong medium to push these issues. Oh yeah, I’ve also started playing Fire Emblem: Heroes and so far it’s just a typical tactical game and I would probably get bored soon. It has a lot of interesting aspects but it gets kinda repetitive after a while — we’ll see though.