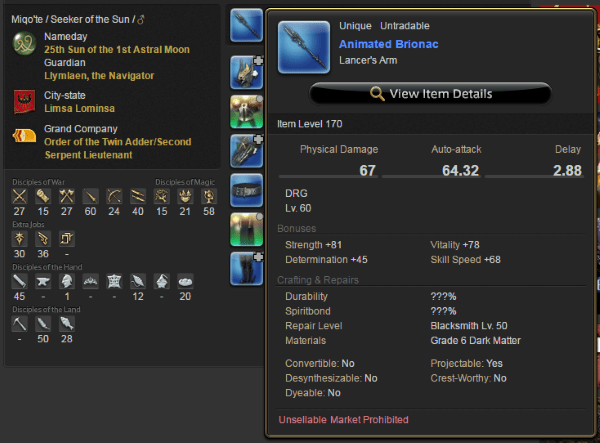 I know that in my last post I’ve decided not to do any of these mind-numbing quests which really forces me to grind. Now the annoying part is that it has been mocking me the last couple of days.Now that I don’t want it, the RNG god just like to screw with me.

I was trying to level up my Summoner which that means doing the FATEs in the area while waiting in the dungeon queue. Now that I’m not trying to get the crystals, I ended up with 4 lightning, 3 wind, and 3 fire…so I said, fuck it, I might as well do this shit. Lo and behold, the acquisition of the crystal went a lot smoother than my first attempt and finally got the first stage of the Anima weapon called, Animated Brionac, a Dragoon Spear. I feel confident on actually able to do this quest line so I look it up on what “hoops” do I need to jump into to get this quest going. Sure enough, there’s a lot of hoops but they are not too bad and it’s not based on RNG this time.

The next stage requires that I have to use this weapon in 10 dungeons. I was a little sour since this is an iLevel 170 weapon and my pathetic damage make me salty — sour and salt is a really bad taste in my mouth. Since the next stage is just about running dungeons, I went ahead and started them sour and salty or not. So far here’s my to-do list;

If it went smoother the first time around, I would have had these dungeons completed by now. The randomness in any game is really frustrating for me and I really have no patience when it comes to that. Running these dungeons is not a problem because there’s no stupid RNG in play. Just complete the dungeon and there’s a progress. If this is a WoW or GW2 quest line, they’ll have you run an hour (plus) long dungeons to have a chance for the item you need to drop from the boss. I am really thankful that FFXIV is not operated by sadistic developers that they actually take the players into considerations. However, the last stage will be a huge grind. Looking at the details, I am glad that I have brought my Botanist to level 50 and my Carpenter to Level 45 (soon level 50) since I will need these jobs in the last stage. I’ve also already unlocked the Alexander raid dungeon so everything I need will eventually come together. See, I love this quest design only because I can knock several of the requirements in the small amount of time I have. I can grind the beast tribes while waiting in the Alexander queue. Then I can grind for the allied hunts afterward. Compare this to the Legendary quest line in WoW and in GW2, where they force you to do things you won’t normally do, FFXIV quest design is very considerate.

Take the Legendary quest line in crafting the weapon Bolt in GW2. The quest line forces the player to run around the map to collect trash — yes trash, the items has no value other than triggering a collection achievement. Then it forces the player to run dungeons and fractals that literally nobody does anymore — or if there are any groups, they are more interested in speed running and they’re a bunch of elitists who discriminate against certain professions. In FFXIV, I can bring any job I want and nobody’s going to give me shit about my choice. And this is only to build one part of the requirement to get the weapon which has 3 stages. Each stage requires items to be collected to a total of 66 trash items — 66 for 1/4 of the required items to get Bolt. Each stage will give the player a reward box that includes the recipe — not even the ingredients, just the recipe. Then more crafting after that. I mean I get it that they want the journey to be “legendary” but come one, these are all unnecessary and cannot be acquired from things that the players actually wanted to do. This is similar to the requirement for flying in Draenor, which by the way I will never do, so I have abandoned this GW2 quest because honestly, it’s not really worth it. No level progression and the Exotic items are enough to complete the contents I want to do, albeit I really want the flashy lightning skin, I digress.

The last stage of the Anima Weapon will take several weeks to complete and hopefully by that time I’ll have my Summoner and Ninja to Level 60 or maybe even the Dark Knight and Machinist — we’ll see. Looking at the whole quest line, the Anima Weapon is just the beginning which is an iLevel 210 weapon and it’s way better than what I’m currently using. To increase the power of the Anima Weapon, I’ll have to do the Hyperconductive quest which is not too bad since it’s just about running dungeons and collecting tomestones. Hyperconductive is an iLevel 230 weapon which is a big deal. The next upgrade is to get the iLevel to 240 which will require that I do the Reconditioned quest. After this, the wiki no longer has any definite information probably nobody is trying to get pass iLevel 240 which is fine since really I’m only interested in getting this weapon to 230 and that’s it. Given the amount of time I actually have in playing this game, I will not have enough time to complete these quests all the way to iLevel 275 before Stormblood comes out.

The amount of work needs to be done with stage 3 Anima is enough to keep me busy for a long while. The important thing for me is to get my other jobs to level 60 before Stormblood and since this Anima Weapon quest line requires that I use my Dragoon, it is currently counterproductive. I can progress with the quest by using my other job when collecting beast tokens and tomestones so that part of the quest is not too bad. The last 3 dungeons in my to-do list requires my Dragoon, so after completing those, I’m switching to my other jobs. My level 50 Botanist actually looks good with a logging weapon comparable to a low-level Warrior axe. Although I might go back to my first Discipline of the Land which is fishing after seeing that I can get a glowing fishing rod. 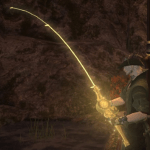 I still don’t know how to get me one of those, but I will definitely try to get it. Once my Botanist is level 60, I’m going back to Fishing, which also means Cooking (for bait and food). My Carpenter can make the Fishing Rod I need until I get the Blessed Tacklekeep’s Rod. Too many things to do, too little time.

Total War: Warhammer
Armello - Game Review
Why did Mass Effect: Andromeda failed?
FFXIV - Progression and other stuff
FFXIV: What a pain in the queue